How positively impactful can pre-snap motion be for NFL quarterbacks? Consider this: In 2020, when former Bears starter and current Bills backup Mitchell Trubisky had the benefit of pre-snap motion, he completed 81 of 111 passes for 856 yards, 381 air yards, seven touchdowns, one interception, and a passer rating of 101.9, which was the league’s sixth-highest for quarterbacks with at least 100 passing attempts. Without pre-snap motion, Trubisky looked a lot more… well, Trubisky-esque, completing 118 of 186 passes for 1,199 yards, 622 air yards, nine touchdowns, seven interceptions, and a passer rating of 82.3, which put him 30th in the NFL.

Not that every quarterback is able to glide off the concept of pre-snap motion to that degree, and no offense to Mr. Trubisky, but if it can turn him into a plus starter, imagine what it can do for the game’s best signal-callers?

When we talk about pre-snap motion, there are two obvious kinds: Motion to indicate, and motion to disrupt. Motion to indicate means that we want the quarterback to have an idea what the defense is doing based on the motion reaction of the defense. Generally speaking, if a receiver goes in motion and a defender follows, man coverage is coming. If the defense stays static and you see adjustment calls, it’s most likely zone. Some defensive coordinators are getting smarter about this, showing man reaction and playing zone and vice versa, and you can expect this to happen more often, but it’s usually helpful.

When we talk about motion to disrupt, we’re talking about the ability to use pre-snap motion to put a defense in a bad position — either by moving a receiver to a spot where he’ll face a defender who can’t keep up with him, or by using motion to establish route concepts in which primary defenders are taken out of the play altogether.

There are those offensive play-callers who have imagined and created all of this to the great benefit of their quarterbacks, and here are the best quarterbacks with pre-snap motion in the 2020 season. 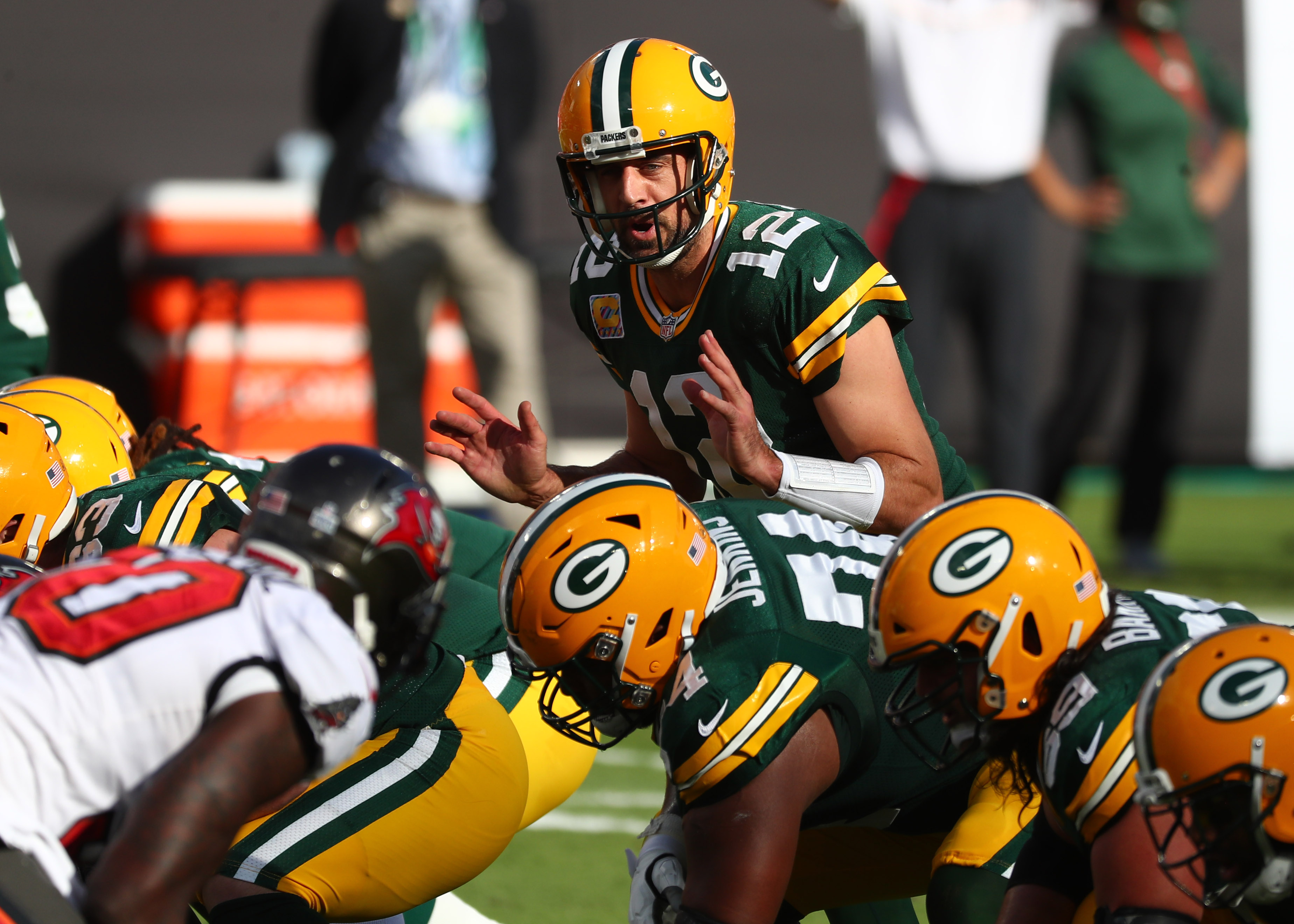 It’s well-known at this point that Aaron Rodgers apparently wants nothing more to do with the Packers, but from a schematic standpoint, head coach and offensive shot-caller Matt LaFleur has done as much as anybody can to help Rodgers on the field — a big departure from the Mike McCarthy days, when Rodgers was tasked to make the most of a napkin-sized playbook. LaFleur is a big believer in pre-snap motion, and he had to get Rodgers on the right side of that.

“We move a lot more,” LaFleur told NFL.com’s Mike Silver in June, 2019. “There’s a lot more motion. There are a lot more moving parts. And so if you just let the quarterback have that freedom to just get to whatever, I’m afraid it would slow our guys down. Now, he is a special talent and he’s got an incredible mind, so as we move forward throughout this process he’s getting more freedom. It’s just, where is that happy medium?”

The happy medium unquestionably happened in 2020, as Rodgers won his third NFL MVP award, and was the league’s most devastating quarterback with pre-snap motion. Last season, on 340 dropbacks with pre-snap motion utilized, Rodgers completed 224 of 315 passes for 2,493 yards, 1,028 air yards, a league-high 37 touchdowns, just four interceptions, and a league-high passer rating of 128.2.

LaFleur dials up all kinds of motion — motion to indicate, motion to disrupt, and motion in every possible way from H-backs crossing the formation to using running backs to create defensive displacement…

Packers used sweep motion with RB Tyler Ervin to create defensive displacement vs. the Saints on this TD, and Rodgers’ 48-yard pass to Allen Lazard. Rodgers rolls the other way. 4 of Rodgers’ 9 TD passes are off designed rollouts, which leads the league. pic.twitter.com/iYAX5WarrC

Rodgers would be great no matter where he goes (if he does indeed travel to a new professional locale), but he’ll find it tough to align himself with another coach who’s done as much for him in the pre-snap phase as LaFleur has. 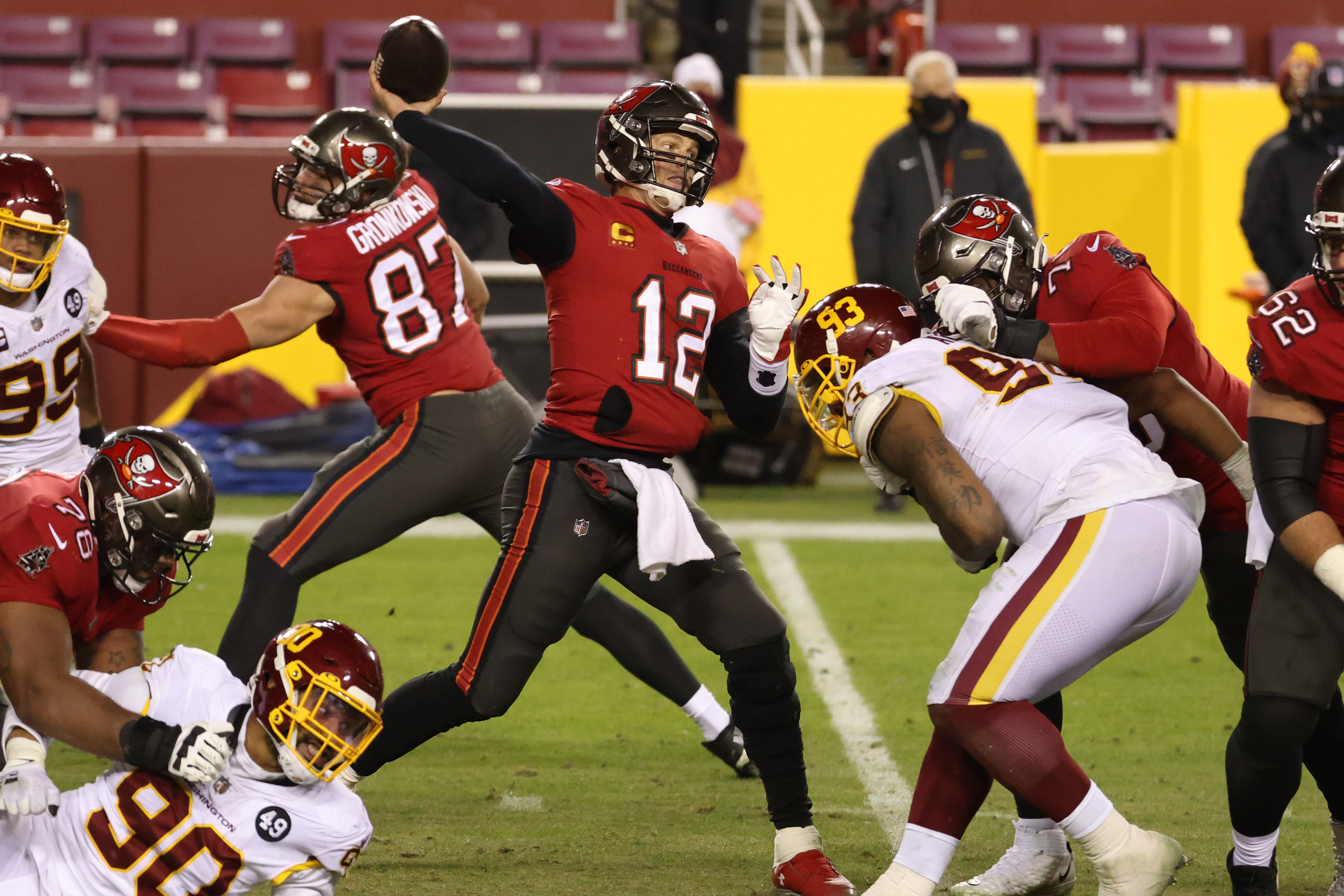 Pre-snap motion was a big part of Brady’s success with the Patriots — in 2019, his last year with the team, Brady led the league in motion dropbacks with 433, and he managed 16 touchdowns to seven interceptions when using it — not bad considering the quality of his targets.

So, when he signed with the Buccaneers in advance of the 2020 season, one expected Bruce Arians to adopt the concept as something that his new quarterback had always enjoyed. At first, that really didn’t happen. Through the first 10 weeks of the 2020 season, Brady had just 162 dropbacks with pre-snap motion, but when he did, he was absolutely ridiculous — 116 of 157 for 1,290 yards, 699 air yards, 17 touchdowns, one interception, and a passer rating of 125.0.

In the second half of the season and into the playoffs, motion became a bigger part of Arians’ offensive philosophy — most likely on Brady’s advice to a certain degree, and certainly for the better. From Week 11 through Super Bowl LV, Brady had 200 pre-snap motion dropbacks, completing 127 of 194 passes for 1,798 yards, 1,049 air yards, 16 touchdowns, and five interceptions. The variance in efficiency was wider because Brady was going for more big plays in the second half of the season, but he was also getting them.

Remember when we talked about motion to indicate versus motion to disrupt? Well, Tom Brady is Tom Brady. He doesn’t necessarily need motion to indicate in the same way a Josh Allen or a Lamar Jackson would. He’s going to dissect your coverage indicators no matter when you do. That gives Bucs head coach Bruce Arians and offensive coordinator Byron Leftwich the freedom to be creative in using motion to disrupt, which they did on this Brady touchdown pass to Antonio Brown in the wild-card round against Washington.

For the best quarterbacks, motion creates all kinds of impossible problems for a defense to solve, and this is one example. 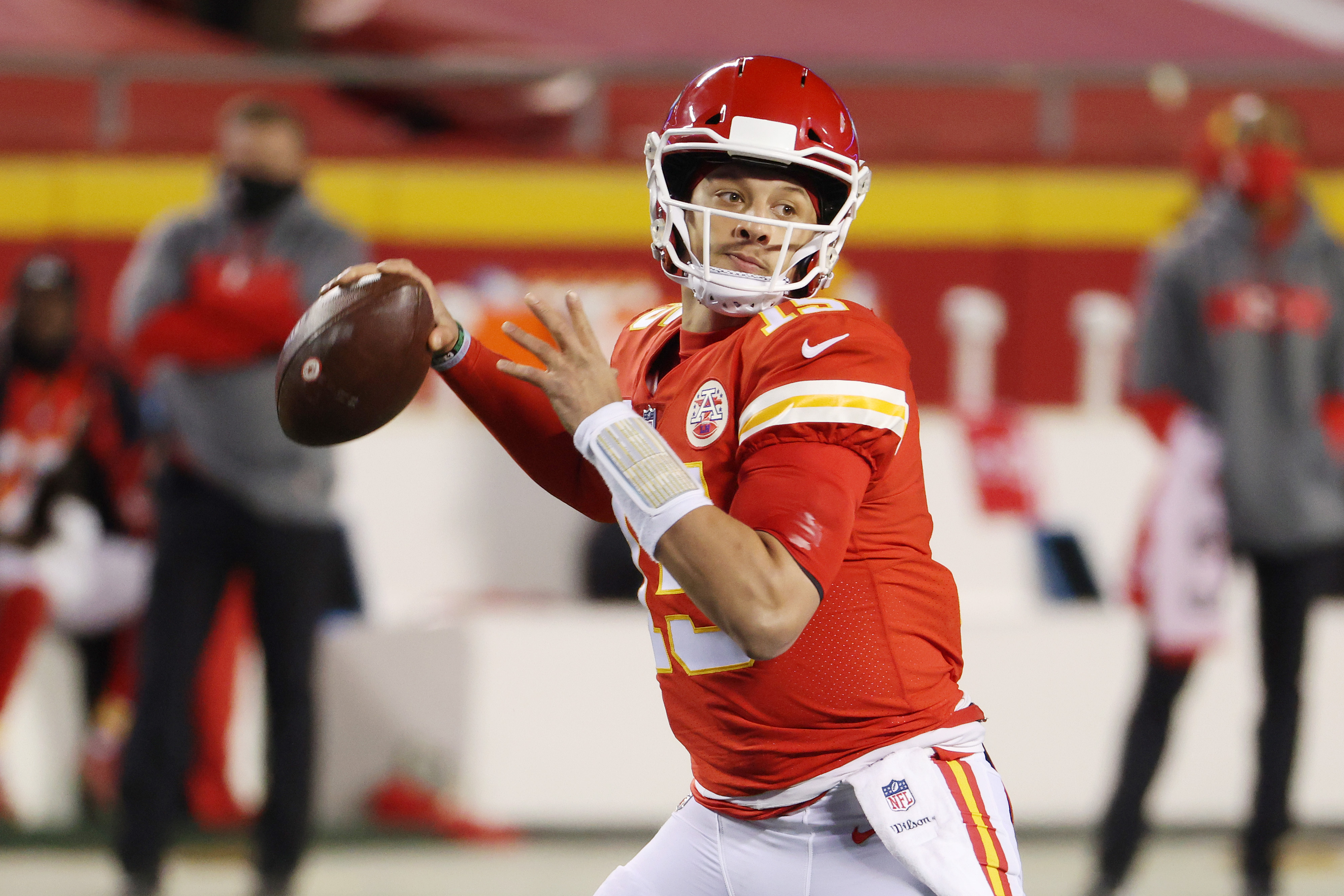 Mahomes has been pretty ridiculous with pre-snap motion since 2018, his first season as a fill-time NFL starter. In that season, he threw 31 of his 50 touchdowns with motion to just four of his 12 interceptions, and he’s been just as efficient with it since then. In 2020, through Super Bowl LV, Mahomes had a league-leading 463 dropbacks with motion, completing 299 of 429 passes for 3,418 yards, 1,579 air yards, 29 touchdowns, three interceptions, and a passer rating of 113.0.

Mahomes’ own mobility adds a ton of defensive problems when the Chiefs use motion, but he’s also a real problem from the pocket. Here, against the Dolphins in Week 13, Mahomes reads Miami’s 2-man coverage, knows Tyreek Hill is going to burn the bracket downfield, and throws with great anticipation. Giving Mahomes the answers to the test like this with pre-snap motion is almost unfair. 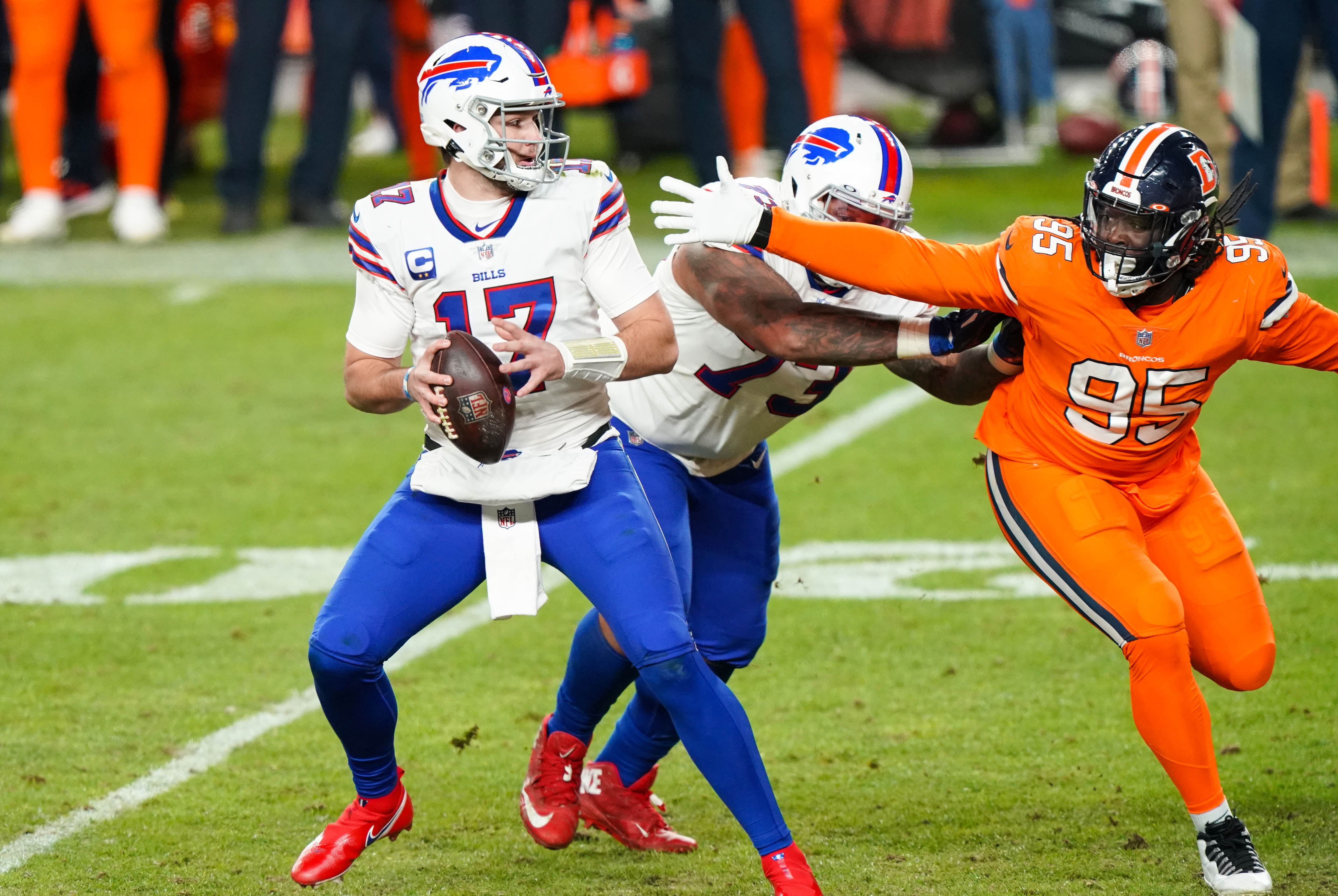 2020 was Allen’s breakthrough season, in which he became one of the league’s best quarterbacks. Allen went through a triptych of a season as a signal-caller — he beat up man coverage early in the season, got a bit confused when he saw more zone and disguised coverages in the middle of the season, and then, he figured it all out.

But through the 2020 season, no matter the coverages he faces, Allen was one of the most efficient quarterbacks with pre-snap motion. In 305 dropbacks, Allen completed 179 of 282 passes for 1,847 yards, 903 air yards, 21 touchdowns, just two interceptions, and a passer rating of 104.1. Part of the problem you face as a defense when the Bills use this motion that you don’t just have to watch out for the passing game; you also have to be aware of Allen’s ability to create big plays in the run game.

In this example of a passing touchdown from the Bills’ Week 15 win over the Broncos, tight end Jake Kumerow motioned from the backfield to the left outside slot. This was motion to disrupt, as offensive coordinator Brian Daboll was trying to get a one-on-one matchup that was disadvantageous to the defense, and Allen saw it right away. Linebacker Josey Jewell had to take Kumerow up the seam, and that wasn’t going to work. Motion basically gave Kumerow a free pass to the end zone, with Jewell trailing behind. Allen made a precise laser of a throw, and that was that.

And as we’ve seen, the Bills now have a Josh Allen backup in Trubisky who operates well with motion. Bonus! 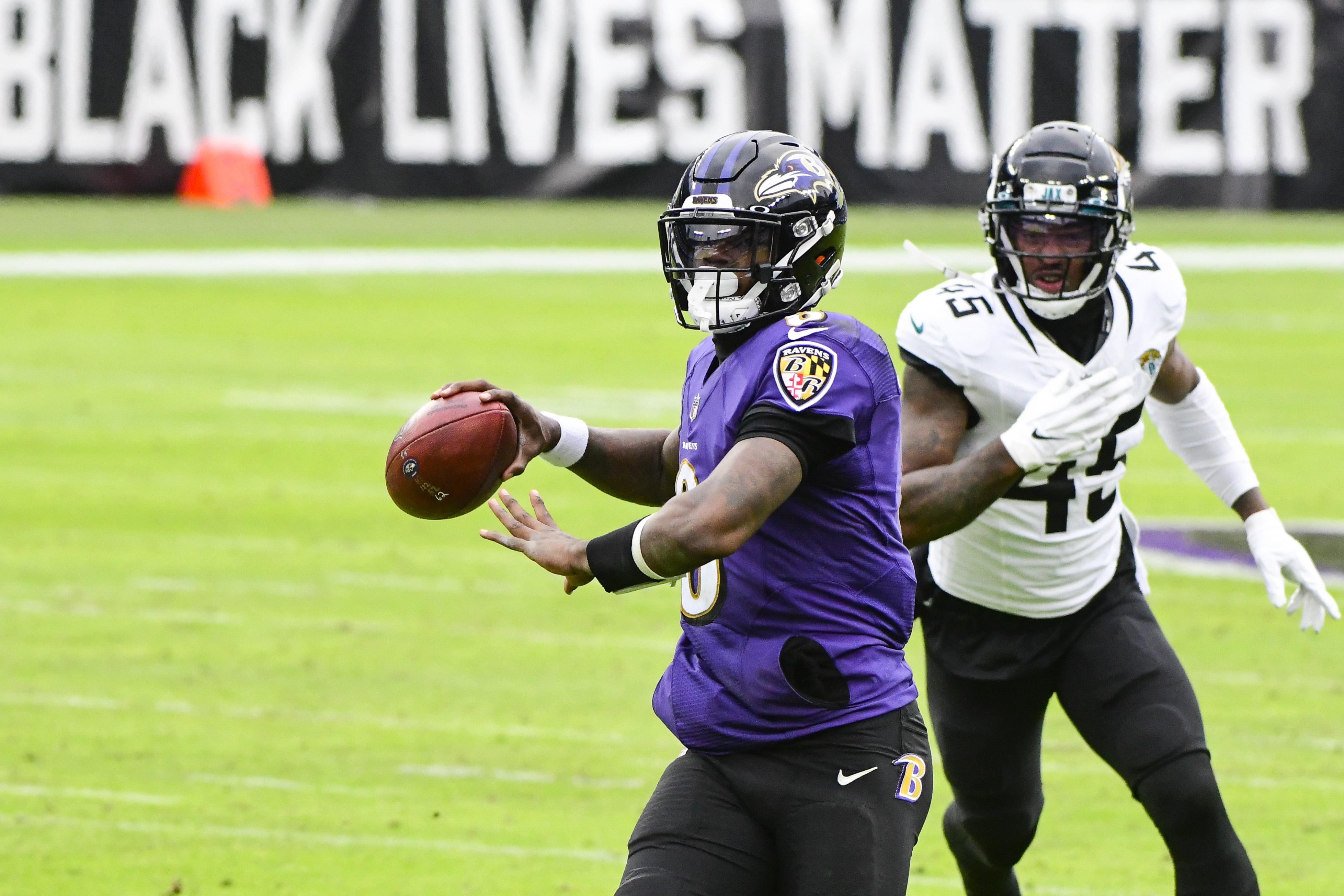 2019’s unanimous NFL MVP didn’t quite live up to his remarkable second season in 2020, as his production and efficiency stats regressed to a point across the board. But Jackson was still a huge problem for enemy defenses when the Ravens used motion, and the Ravens are just as likely to use it in the run game as they are in the passing game. It helped Jackson a lot as a pure passer — last season, he had 320 dropbacks with pre-snap motion, completing 179 of 267 passes for 2,030 yards, 1,080 air yards, 18 touchdowns, four interceptions, and a passer rating of 109.7.

Jackson is at his best as a passer when his one-on-ones are decisively created with scheme, and this deep pass to Marquise Brown against the Jaguars in Week 14 is a good example. Tight end motion gives Jackson the man indicator, and he knows he’s going to have Brown — his primary speed receiver last season — one-on-one to the boundary. Add in the blitz reducing coverage, and the late safety help, and this is about as pitch-and-catch as it gets. 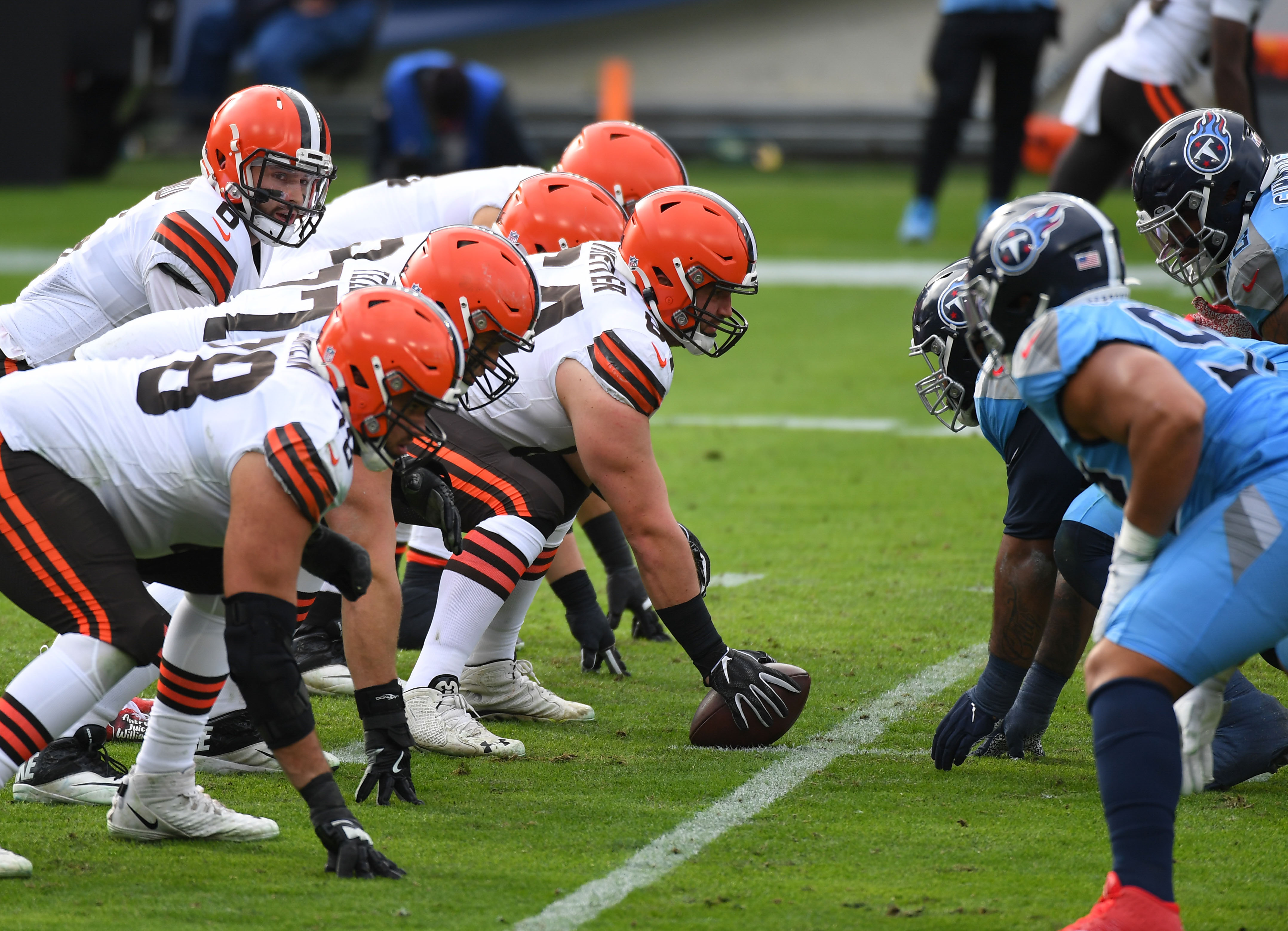 In his first season as the Browns’ head coach and offensive play-caller, Kevin Stefanski did a great job setting quarterback Baker Mayfield up for success with everything from multiple boot-action concepts to devastating route combinations. Certainly, pre-snap motion was a big part of the equation. Last season, on 312 motion dropbacks, Mayfield completed 188 of 283 passes for 2,014 yards, 1,140 air yards, 15 touchdowns, three interceptions, and a passer rating of 100.3.

One of the most unintentionally hilarious examples of motion just killing a defense last season came in the Browns’ Week 13 win over the Titans. Tennessee’s defense appeared confused a lot of the time last season, and when receiver Donovan Peoples-Jones and tight end Austin Hooper motioned on the offensive right side and tight end Harrison Bryant moved from the formation to the backfield (Stefanski does love him some 13 personnel packages)… well, the Titans were quite obviously in a pickle about the whole max protect thing.

Mayfield identified the huckleberry in the person of cornerback Breon Borders, and the result was a particularly easy 75-yard touchdown from Mayfield to Peoples-Jones — assisted by the nasty out-and-up move that Peoples-Jones put on Borders. Yikes. 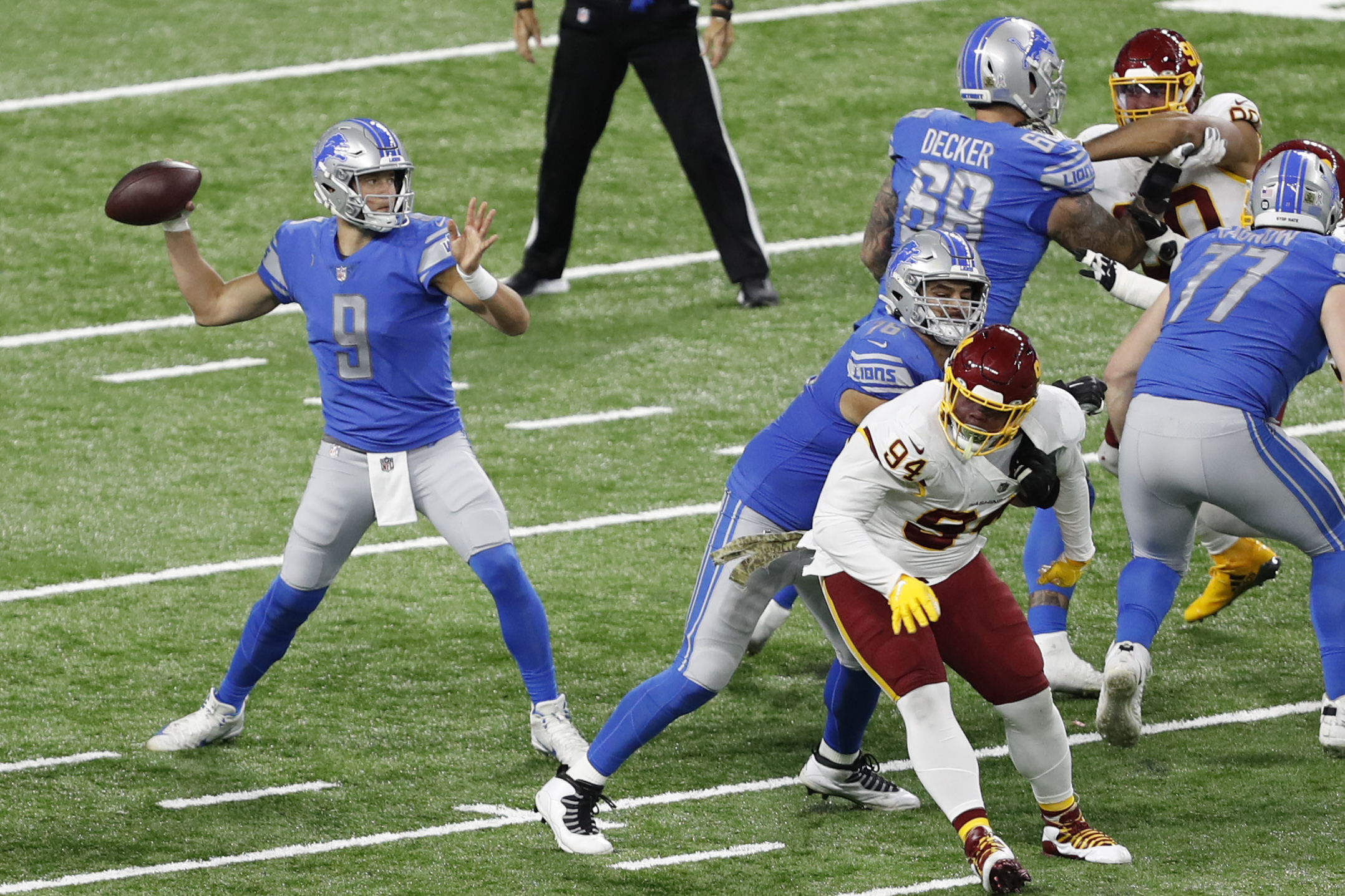 This is where it gets interesting. Last season, Jared Goff threw eight touchdown passes and eight interceptions with pre-snap motion. Goff tied with Carolina’s Teddy Bridgewater for the most interceptions with motion, and Bridgewater threw four more touchdowns. So, it could be credibly said that for whatever reason, motion didn’t work for Goff at all. Which means it didn’t work for head coach Sean McVay, either. It could have been one reasons the Rams traded Goff and a ton of draft capital to the Lions for Matthew Stafford — certainly, Stafford enables McVay to open the playbook up in ways Goff never did.

Last season, Stafford had 243 dropbacks with motion, completing 147 of 226 passes for 1,734 yards, 852 air yards, 13 touchdowns, five interceptions, and a passer rating of 101.9. Stafford still has one of the best deep arms in the NFL, and on this 55-yard touchdown pass to Marvin Hall against Washington’s top-three defense, tight end Isaac Nauta moves pre-snap from the formation to the backfield, making deep safety Deshazor Everett’s read to that side. As a result, Hall has a one-on-one matchup against cornerback Kendall Fuller, who can’t quite keep up. When Hall gets outside position to the boundary, that’s the ballgame.