A lifelong fan of sports entertainment, Lambert has been involved with the business for years, getting into on-screen feuds thanks to the crossovers between professional wrestling and mixed martial arts. He’s also quite the collector as he has an incredible display of pro wrestling championship belts.

On Wednesday, Lambert took the mic at All Elite Wrestling’s show to cut a fantastic heel promo, but he also brought along a few familiar faces.

ATT mainstays, UFC champ-champ Amanda Nunes and the BMF title winner Jorge Masvidal, were shown sitting ringside along with Lambert early in the broadcast, initially thought to just be fans for the evening.

However, later in the show, Lambert and crew were brought on screen for an interview, and that’s when his love for the business truly showed as he took the mic from commentator Tony Schiavone and began cutting a promo that got fans all riled up.

“When AEW decided to come to Miami, the home of American Top Team, Tony Khan called and asked if the BMF champion, Jorge Masvidal, and the two-division UFC champion and greatest female fighter of all time, Amanda Nunes, would make an appearance, but nobody said anything about doing an interview or endorsing this show,” Lambert started.

After putting Masvidal and Nunes “over” ringside, Lambert entered the ring and continued a verbal assault on AEW while also promoting Dustin Poirier ahead of Saturday’s UFC 264 trilogy bout with Conor McGregor.

“In fact, as an old-school professional wrestling fan, I was skeptical of even coming to this place in the first place,” Lambert continued. “… and not because I’m a busy guy running the largest and most successful mixed martial arts gym in history of this planet, or because I got better things to do this week like head out to Las Vegas and see my guy Dustin Poirier knock out Conor McGregor again!”

Lambert continued to criticize AEW’s place in pro wrestling, which caused fans to boo, and ultimately, prompted wrestler Lance Archer to come to the ring and dish out some punishment at the conclusion of the promo.

For his efforts on the mic, Lambert paid for them with a forearm to the face, and also Archer’s finishing move, the blackout, an overhead slam that Lambert sold like a true pro.

One thing’s for certain: Lambert’s love for the pro wrestling business shined as the ATT owner checked all the boxes in this segment.

The Blue Corner is MMA Junkie’s blog space. We don’t take it overly serious, and neither should you. If you come complaining to us that something you read here is not hard-hitting news, expect to have the previous sentence repeated in ALL CAPS.

UFC 264: All the free Dustin Poirier and Conor McGregor videos you can handle 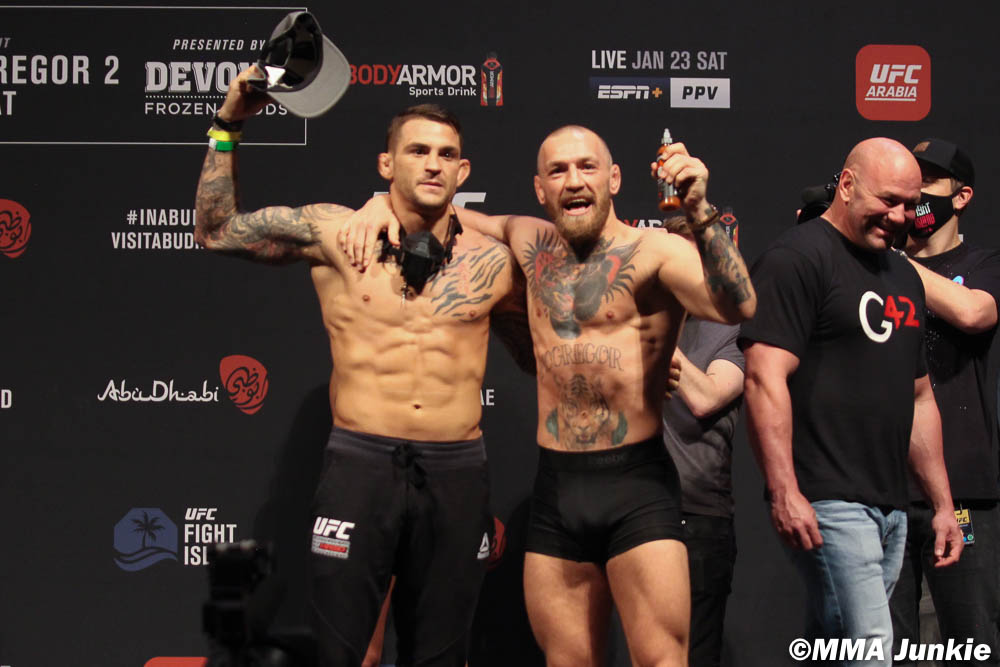