It duly arrived at this weekend’s Spanish Grand Prix with some new parts to evaluate as it aims to enhance the performance of the MCL35M.

The parts were first tested by Lando Norris during FP1 while his team-mate, Daniel Ricciardo, collected baseline data on the old set-up.

Both had the revisions for FP2, with the front wing optimised to suit a higher-downforce configuration, whilst its new floor follows the example set by rivals.

The changes made to the front wing are very subtle, with the arrangement used in the opening phase of the season just needing to be tweaked to get a little more performance, without destabilising the flow structures that have already been established to link up well with the other aerodynamic furniture downstream.

The optimisations, albeit small but thorough, see the entire flapped section of the wing altered. This is more apparent at the inner and outermost areas, where the geometry of the mainplane has been altered at the connecting points.

In the outer section of the wing, the mainplane now has a straight section where it connects to the endplate, rather than drooping down (highlighted in orange).

This has a corresponding effect on the shape of the flaps behind too, as they have to be adjusted in response. All of this alters how the wing elements interact with the endplate and, as a result, how the airflow behaves too.

It’s a similar story as the mainplane connects with the neutral central section of the wing, with the leading edge now drooping down with a more gentle curve applied as it reaches across the front of the wing (highlighted in orange).

This change in profile at the junction of the two sections of wing will result in the Y250 vortex being shed from the region being altered as the team tunes the direction, shape and/or velocity of the vortex before it makes its way toward other aerodynamic devices downstream.

The shape of the flaps aft of the mainplane has also been altered too, further altering the shape, direction and velocity of the vortex, whilst also changing the ratio of the wing available for flow conditioning versus downforce generation.

The two strakes mounted on the underside of the wing also appear to have been modified, being placed more closely together and with the outermost strake reduced in height slightly too. 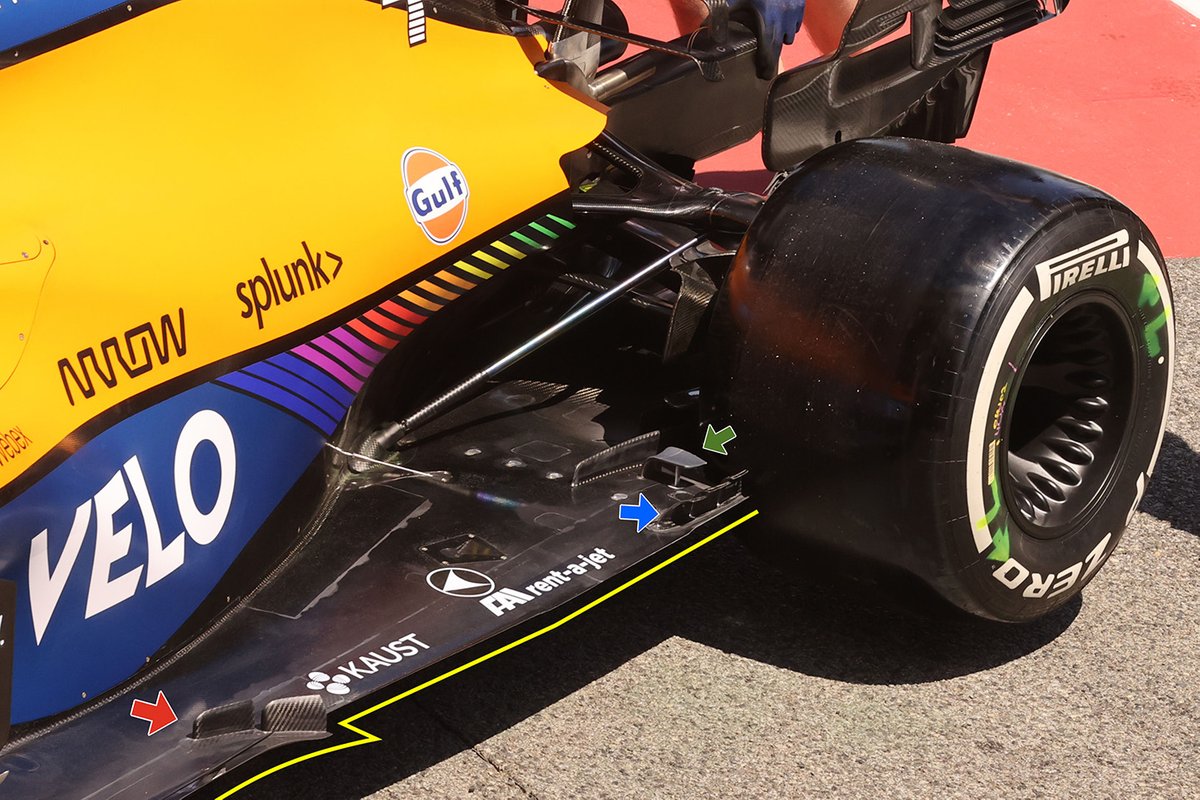 McLaren is also the eighth team to try a Z-shaped floor layout, having watched its rivals progress with interest during the opening phase of the season, whilst readying its own version.

The solution has been paired with two staggered, outwardly angled fins (red arrow) at the start of the cutout, as it looks to direct the airflow into the cutout’s path and initiate a more powerful vortex structure.

And, whilst it will undoubtedly have to readdress the topside aero structures ahead of the rear tyre, the team has been actively chasing gains here already this season.

The team is using quadruple fins that arch over on the edge of the floor (blue arrow) and the ‘r’ shaped vane (green arrow) in order to try and redirect the airflow before it reaches the tyre face. If unchecked this can spill into the diffuser, reducing performance.