If Verstappen hadn’t pitted for a new set of tyres to try and win the extra point for driving the fastest lap, he would have won the race with a huge margin of approximately 42 sec. towards Mercedes driver Valtteri Bottas who finished second.

The youngest race winner ever also extended his championship lead to 32 points on runner-up Lewis Hamilton today. The Mercedes driver who extended his F1 career with a new 2-year contract at Mercedes last Friday, just wasn’t quick enough around the Red Bull Ring to keep up with Verstappen.

Even his teammate Valtteri Bottas who normally has no chance of beating the seven-times world champion, was faster and could pass Hamilton on the track. Hamilton seemed to have damaged his floor by driving over the notorious curbstones of turn 10, which slowed him down significantly.

Verstappen’s teammate Sergio Perez didn’t drive a very good race. After the safety car restart he got himself in trouble when he was trying to overtake Mclaren driver Lando Norris on the outside of turn 4. Just like his predecessor experienced last year with Hamilton, he also ended up in the gravel, because Norris had the inside line and didn’t gave up his place. The stewards did gave Norris a 5 sec. penalty for it, which was a controversial decision.

Pérez trip through the gravel caused him to drop back to P10. The Mexican driver now had to fight with Sainz, Leclerc and Ricciardo. Three drivers top drivers who are not very easy to overtake. Near the end Perez even was given two 5 sec. penalties for forcing of the Ferrari of Leclerc in the same corner as he ended up in lap 4 with Norris. Because of this Perez even lost a place after finishing 5th. The Mexican ended up on P6.

Red Bull Racing now won 6 of the 9 races this season. The team even won 5 races in a row now since Monaco and Verstappen won the 3 last races, which is the first time in his career. He now already equals the amount of race victories of Jenson Button and is one short to get level with the late legendary Stirling Moss.

Moss still has the record of most races without winning a world championship. That said, he could have won the 1958 championship if he wasn’t the gentleman that he was and wouldn’t have prevented disqualification of his rival Mike Hawthorn in the last race in Morocco. 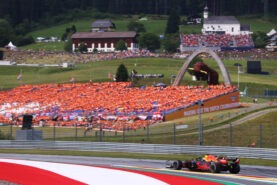 So the statistics show that Verstappen will win his first F1 drivers title this season, which is a huge accomplishment during this very dominating era of the Hamilton and the Mercedes team.

After a year of hardly any spectators due to the COVID-19 measures, we saw a huge crowd of 60.000 fans on the grand stands at the Red Bull Ring today. It wasn’t a full house yet, but the huge amount of Dutch fans made enough noise to compensate that. 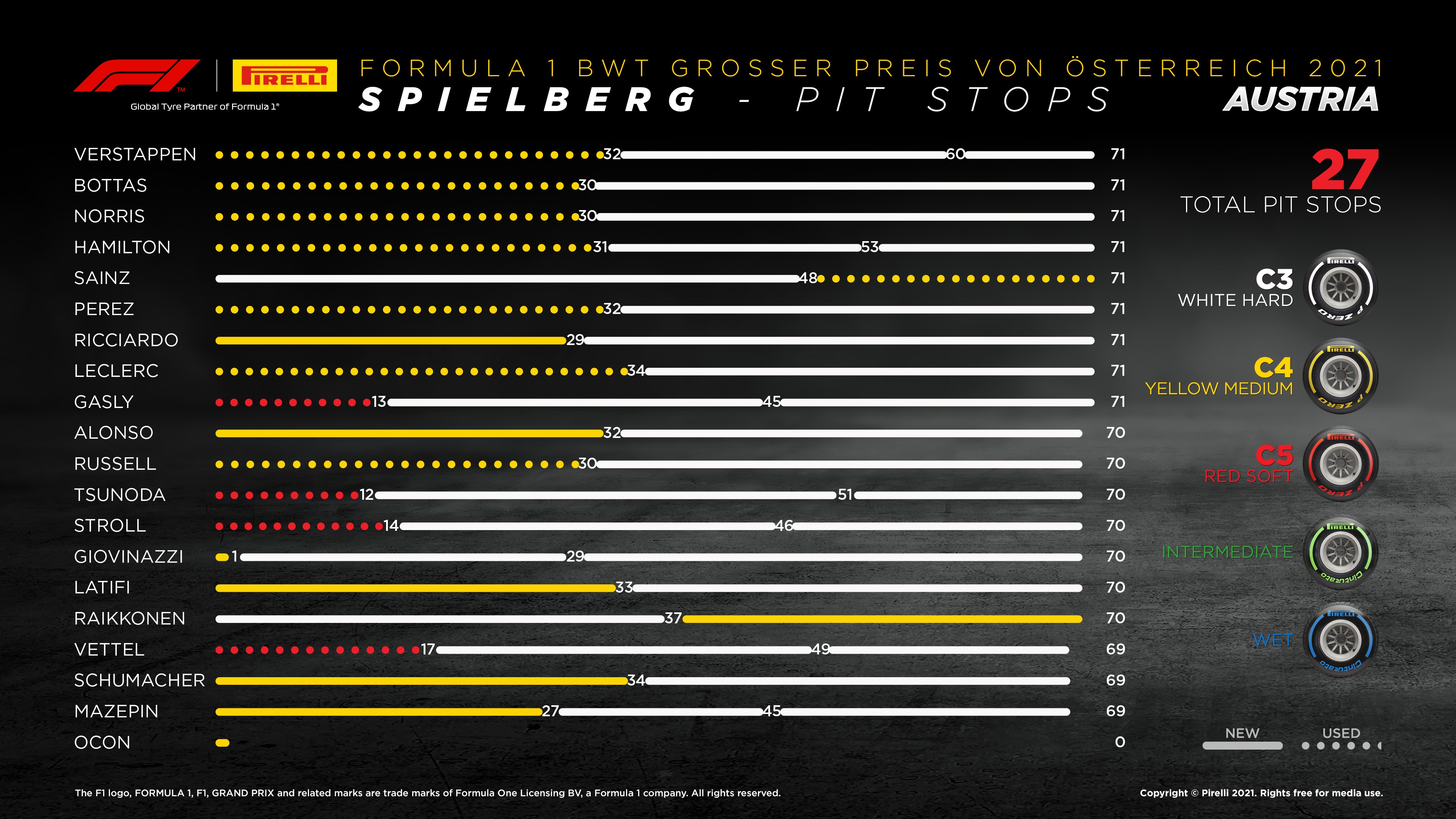 How each tyre compound performed

HARD C3: Used by two drivers to start the race, with Sainz running his starting set for 48 laps before switching the medium. He eventually ended up fifth from 10th on the grid. All the drivers apart from two (who started on this compound) used this for the final stint, with Verstappen claiming the extra point for fastest lap on his final set of hard tyres.

MEDIUM C4: One of the crucial tyres for this race, which was used by the majority of drivers to start the race, but only two of them to finish it (Sainz and Raikkonen: who both started on the hard tyre).

SOFT C5: All the four drivers who started on the soft tyre stopped twice as expected, using the hard tyre twice for the second and third stints. The cooler conditions today helped bring out the best in the softer compounds. 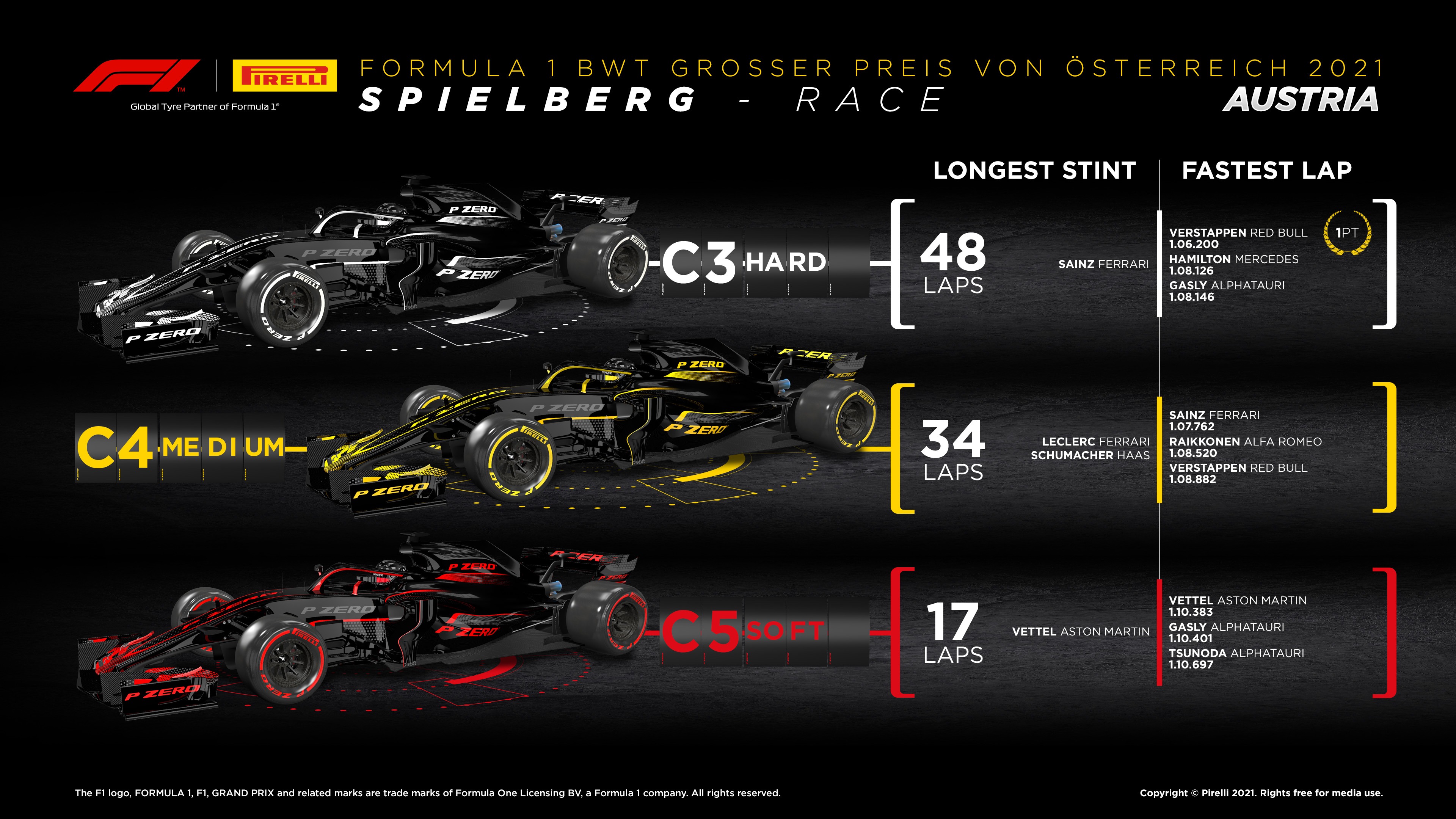