At last weekend’s Austrian Grand Prix, it even emerged as a thorn in the side of the world champion Mercedes team – outqualifying the Silver Arrows and battling them hard in the race.

Its approach to making that progress has been measured too. Rather than rushing through upgrades, it appears to be taking stock of what’s going on around it: analysing the relative strengths of competitors’ designs and dialling them in in order that it works with its own setup.

After all, McLaren was one of the late adopters when it came to the Z-shaped floor arrangement (below). Only the eighth team to do so, it introduced the solution at the Spanish Grand Prix having used a tapered solution which was more akin to what the rule makers had envisaged when changing the rules for 2021.

Its latest update is another example of this approach, as it added a cluster of outwardly angled fins alongside the widest section of the sidepod to help redirect the airflow and reinforce some of the flow structures it was already promoting.

This is also a design feature we’ve seen other teams use, such as Red Bull (bottom, middle) in order to create even more of a pinch point on that part of the floor. 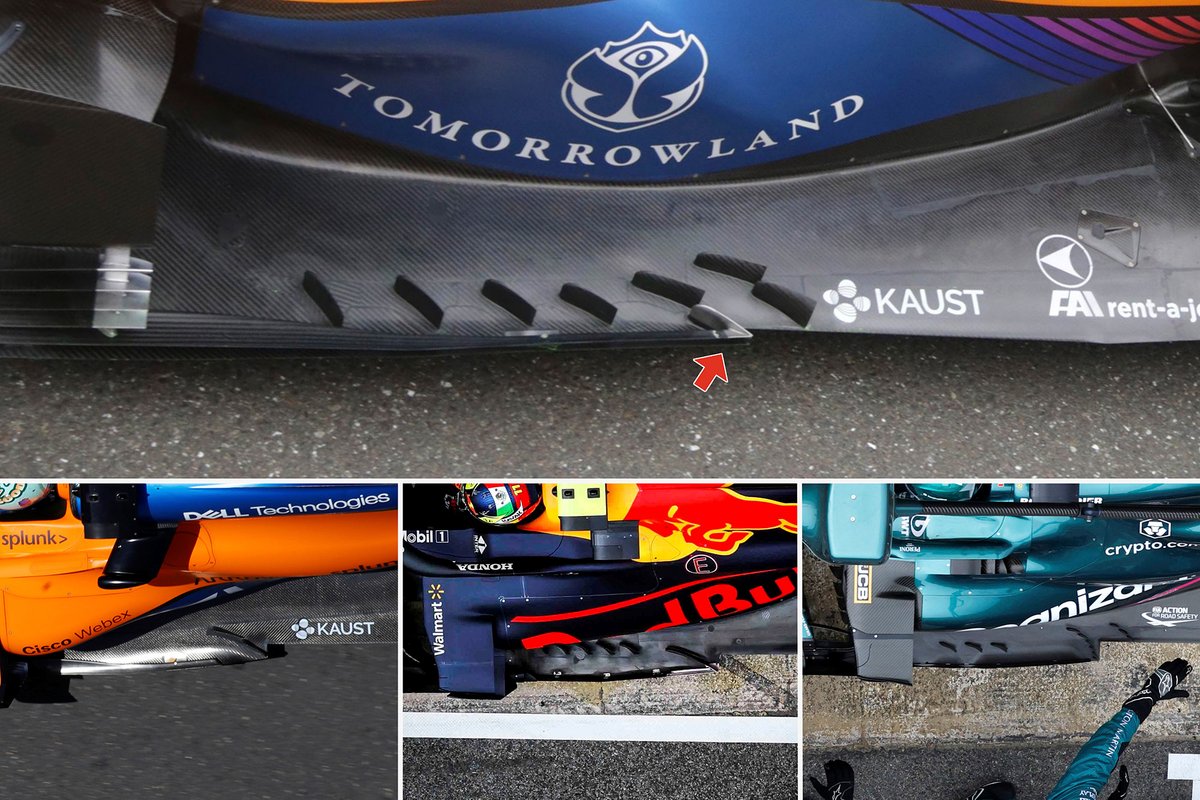 There’s no one size fits all template when it comes to the placement and orientation of the fins either, with Red Bull using five fins more closely aligned to the sidepod, Aston Martin switched to four fins for the Austrian GP but had used three up until that point (bottom right). That’s because while there’s a general performance increase for teams using them, they have to be tuned to each of their specific flow demands.

In McLaren’s case they’ve opted for a very deliberate angle change for the fins too, with a steeper angle on the first fin that descends to something much shallower by the time it reaches the pair of fins that could already be found on the old specification of floor.

A second pair of fins have also been added just behind this too, the outermost of which has been arched over in order to promote the same reaction from the airflow. 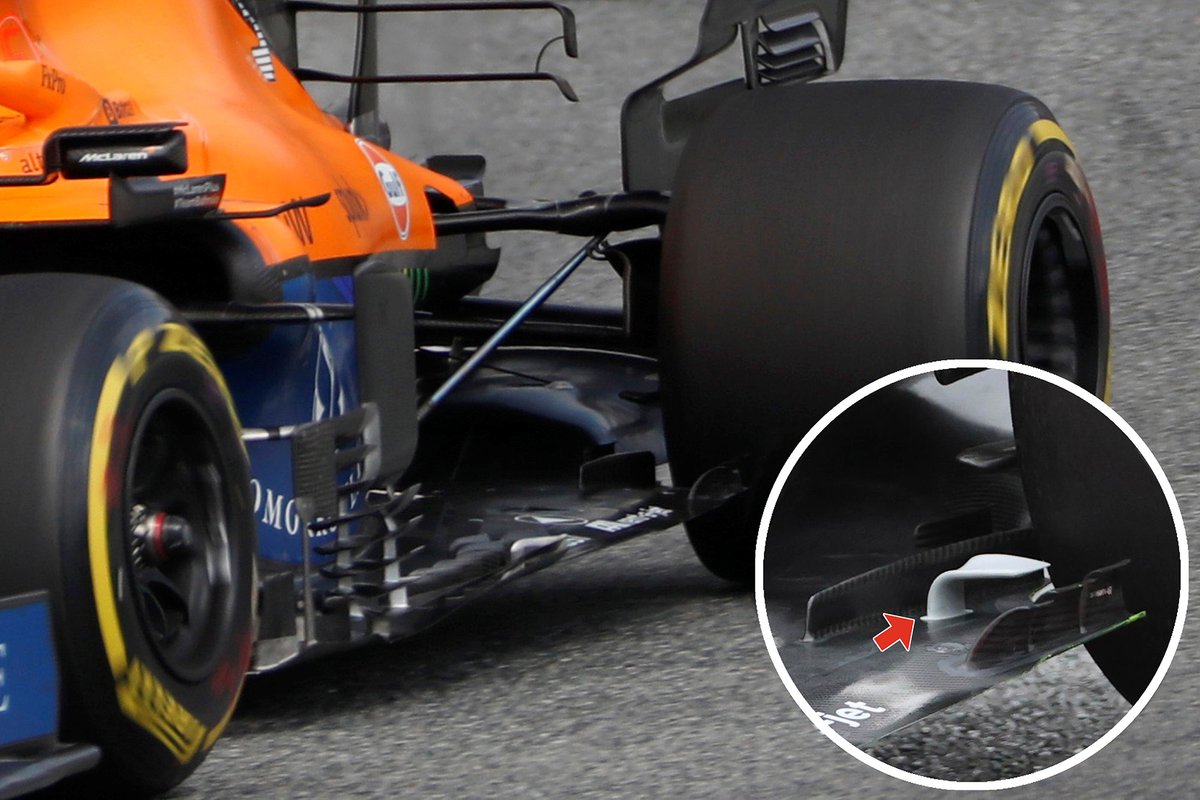 The arrival of this new cluster of winglets at the front of the floor has also allowed the team to delete the ‘r’ shaped vane that had been added ahead of the rear tyre several races ago. The work being done upstream has likely made this vane redundant, with the new solution seen as a more efficient way to provide the performance that the team is searching for.

The Red Bull Ring offered McLaren the perfect venue to prove its new cooling solution was up to the job at hand, as the altitude puts an emphasis on the trade-off between the need to keep the power unit within the operating window and a loss of aerodynamic efficiency from opening up the bodywork.

The smaller rear cooling outlet had its debut at the French Grand Prix following the team’s more conservative approach in the opening races, given its switch to Mercedes power for 2021.

The team did make further concessions for the Styrian and Austrian Grands Prix though, as the team used louvred cooling panels in the bodywork beside the driver to help reject heat from within the sidepods.

Only the panel on the right-hand side of the car was opened for the Styrian GP but the team opened up both sides of the car for the second race in as many weeks at the Red Bull Ring. 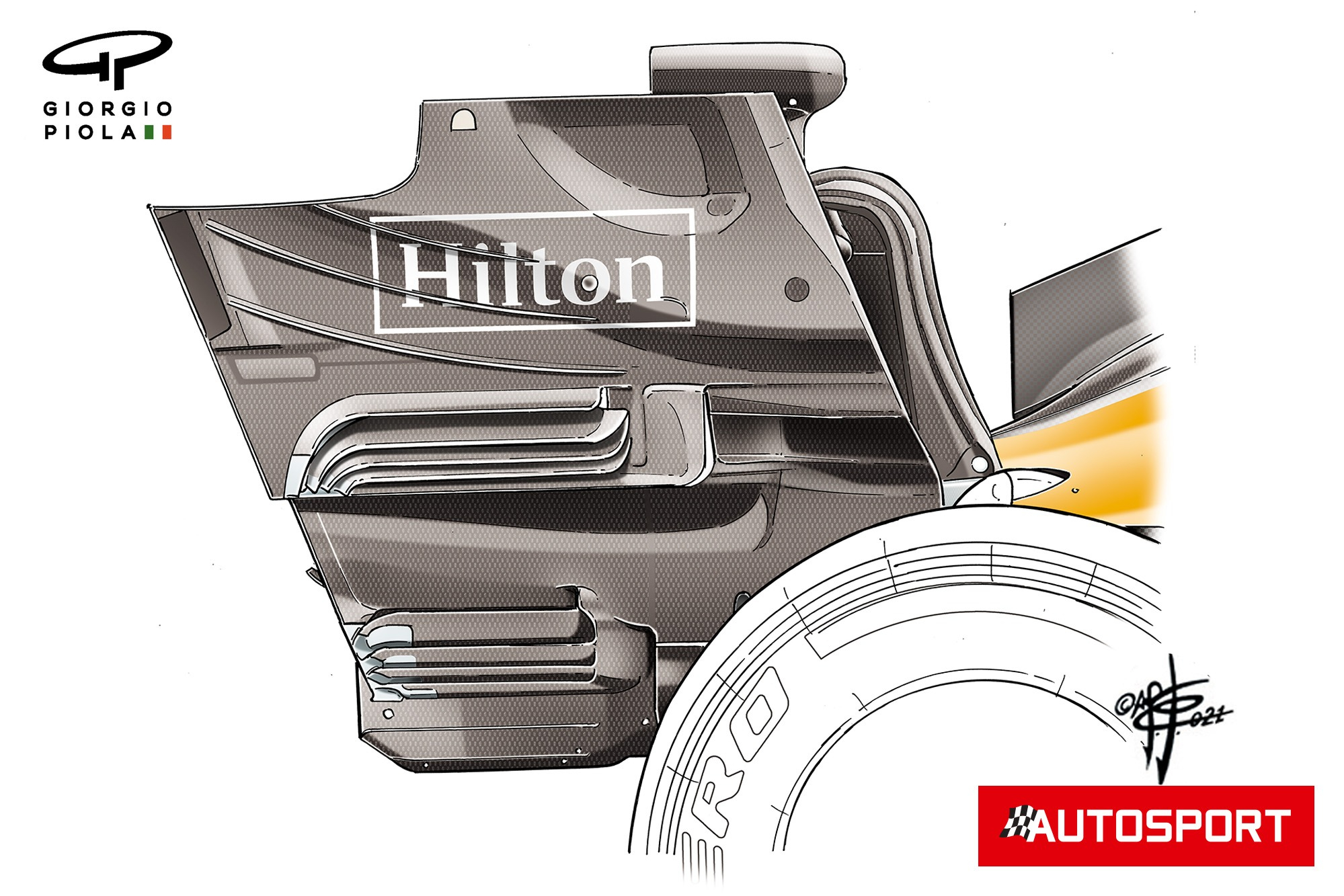 McLaren has also invested time and resources in developing its own individual development streams too, with a new rear wing endplate design introduced by the team at the French Grand Prix that bucks the usual trend.

The lower half of its endplate now features a horizontal set of louvres similar to those used above, albeit orientated differently to allow the airflow correct passage. This is very different to the solutions we usually see in this region, with teams having favoured vertical strakes here for a number of years now.