Jun.6 -The second ever Styrian Formula 1 Grand Prix has been driven under unsuspected dry weather circumstances. Before the weekend started weather forecasts predicted a 90% chance of rain in the Alps, but just a few drops were seen.

Max Verstappen took his second consecutive win and the fourth one on the trot for Red Bull, thanks to a one-stop medium-hard strategy from pole position in Austria. Mercedes driver Lewis Hamilton, who finished runner-up, followed the same strategy before making a second stop on the penultimate lap to fit softs and gain the extra championship point for fastest lap.

The highest-classified driver to start on the P Zero Red soft tyre was Red Bull’s Sergio Perez, who finished fourth after being passed by Mercedes driver Valtteri Bottas following a slow pit stop. Perez also made a second stop: this time for P Zero Yellow mediums 17 laps from the end of the race. He used this set to make up ground on Bottas, finishing just behind the Mercedes driver.

All the drivers stopped once apart from four two-stoppers: Hamilton, Perez, Ferrari’s Charles Leclerc (who eventually finished seventh from the back of the field) and Williams driver Nicholas Latifi.

The drivers who had a free choice of starting tyres opted for the medium (apart from Alfa Romeo’s Kimi Raikkonen) as this was the most versatile choice. However, it was obviously not an option for those who had set their best Q2 times on the soft compound.

Despite the consistent forecasts of rain for the weekend and some dark clouds towards the end of the grand prix, once again wet weather didn’t materialise throughout the 71 laps. Instead, conditions were warm and dry: 31 degrees ambient and 47 degrees on track at the start. 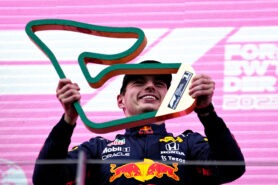 Race winner Max Verstappen celebrates on the podium during the F1 Grand Prix of Styria at Red Bull Ring on June 27, 2021

“I am super happy to win here and doing it at home at the Red Bull Ring is always so special. I had a really enjoyable race, the car was working well and I always enjoy driving on this track. I just focused on my own race, concentrating on hitting the apexes in the places I wanted to, looking after the tyres and it worked out well.

You never know how competitive or how close it’s going to be on a Sunday and to be honest I really wasn’t expecting it to be like it was today as the long run pace between the two teams was very closely matched all weekend.
It’s a whole Team effort so thank you very much to everyone here and back at the factory for another great win today.

“Overall, we’ve had a really positive weekend and of course it’s not going to be completely the same next week. Everyone else will also learn from this race so we will of course try and do even better and keep improving ourselves so we can stay ahead. It’s a whole Team effort so thank you very much to everyone here and back at the factory for another great win today.”