But while its senior bosses were upset about a situation it felt was unfair, its technical staff were fully focused on trying to get out of the hole it found itself in.

A series of small updates that appeared over the early phase of the season did the job in turning things around. From scoring just five points in the opening four races, it scored 39 in the next four.

And although it did not add to its tally in the Austrian Grand Prix last weekend, the team laid down its marker at the Red Bull Ring with what was perhaps the single biggest update we have seen from any team on the grid so far.

The changes start at the very front of the car, with a small but meaningful change to the front wing’s uppermost flap. The majority of the flap has remained unchanged but the tip section now has a prominent bulge that will alter the airflow’s path downstream (red arrow).

The revised bargeboard cluster changes are the linchpin in the overhaul, as the alterations will undoubtedly have an impact on the flow structures arriving at them, while also boosting the performance of the new components fitted to the car downstream. 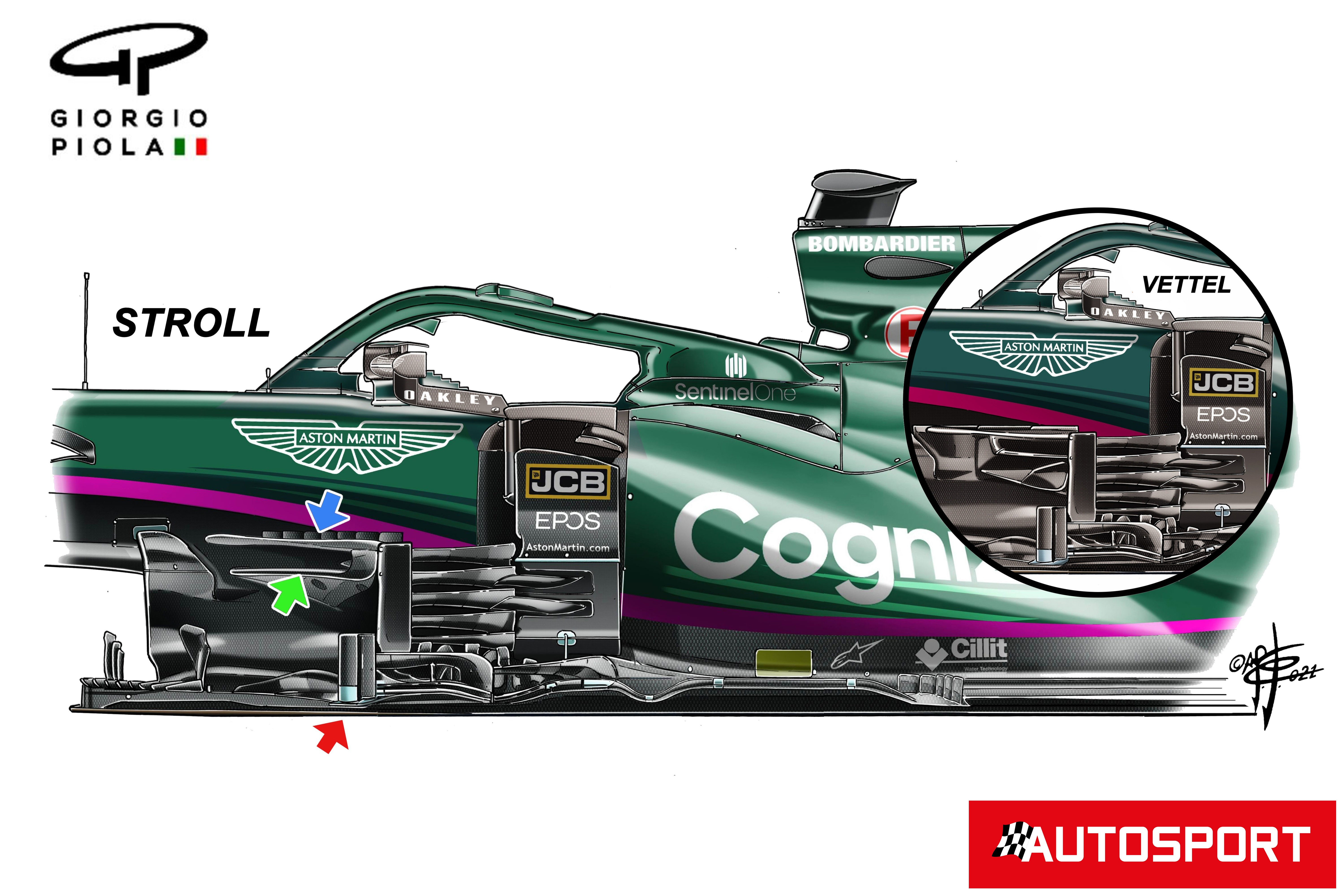 As we can see here in the comparison, there were only enough parts available at the track to install them on one car, with Lance Stroll being given preference even though the team had previously stated the running of updates would be based on championship order.

The alterations include a more pronounced lower boomerang winglet (green arrow), extra slots added into the main vertical element to create a feather-like surface (blue arrow), whilst the axehead section of the floor now also rises to create a wave section like the floor behind (red arrow). 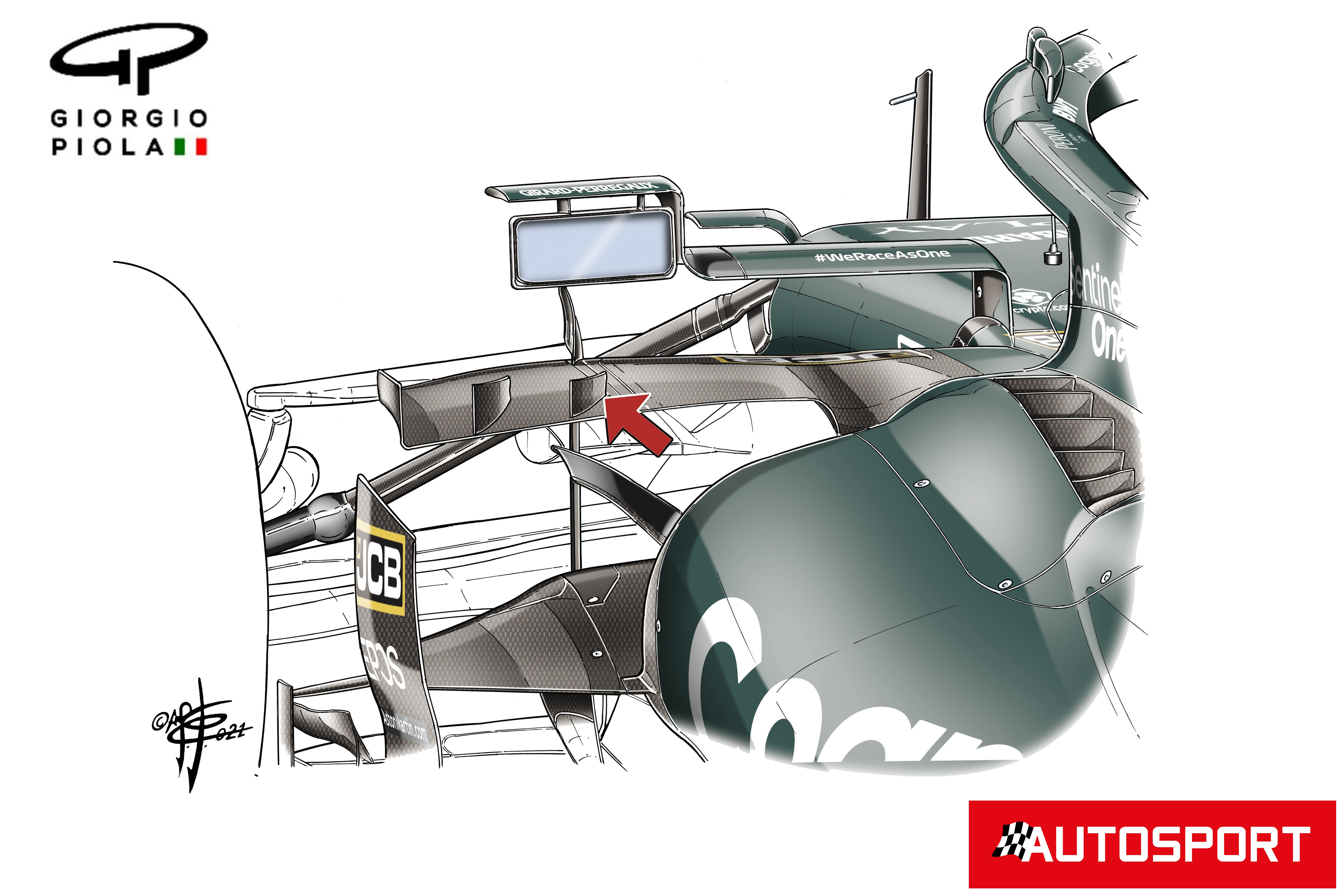 The team has also added two vortex generators on top of the sidepod wing, as it looks to coerce the airflow that’s passing by the sidepod’s shoulder, which already has an imposing fin sticking out at a 45-degree angle. 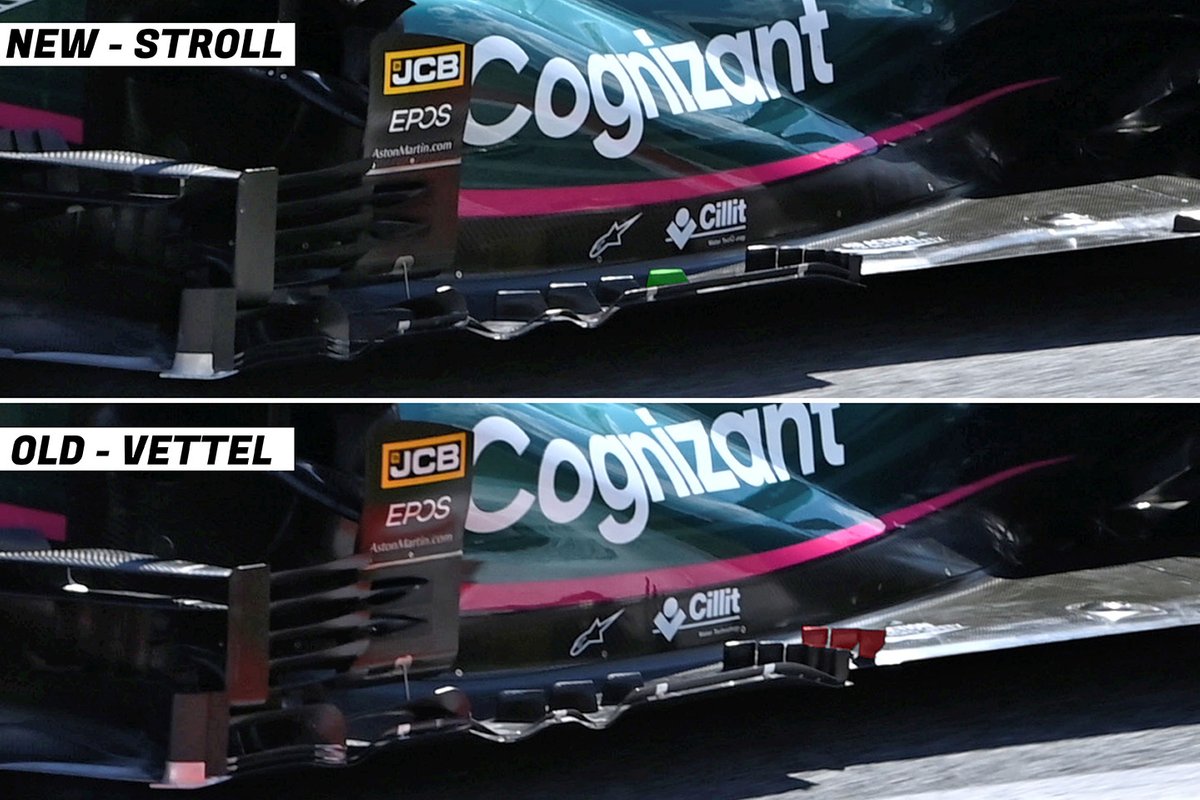 The floor also received attention, with both additions, deletions and modifications made to help improve its overall performance.

Alongside the sidepod, the team added an additional fin (highlighted in green), taking the count from three to four. But where it previously had two clusters of half-moon shaped fins mounted around the floor cutout, it opted to remove one set entirely (highlighted in red). 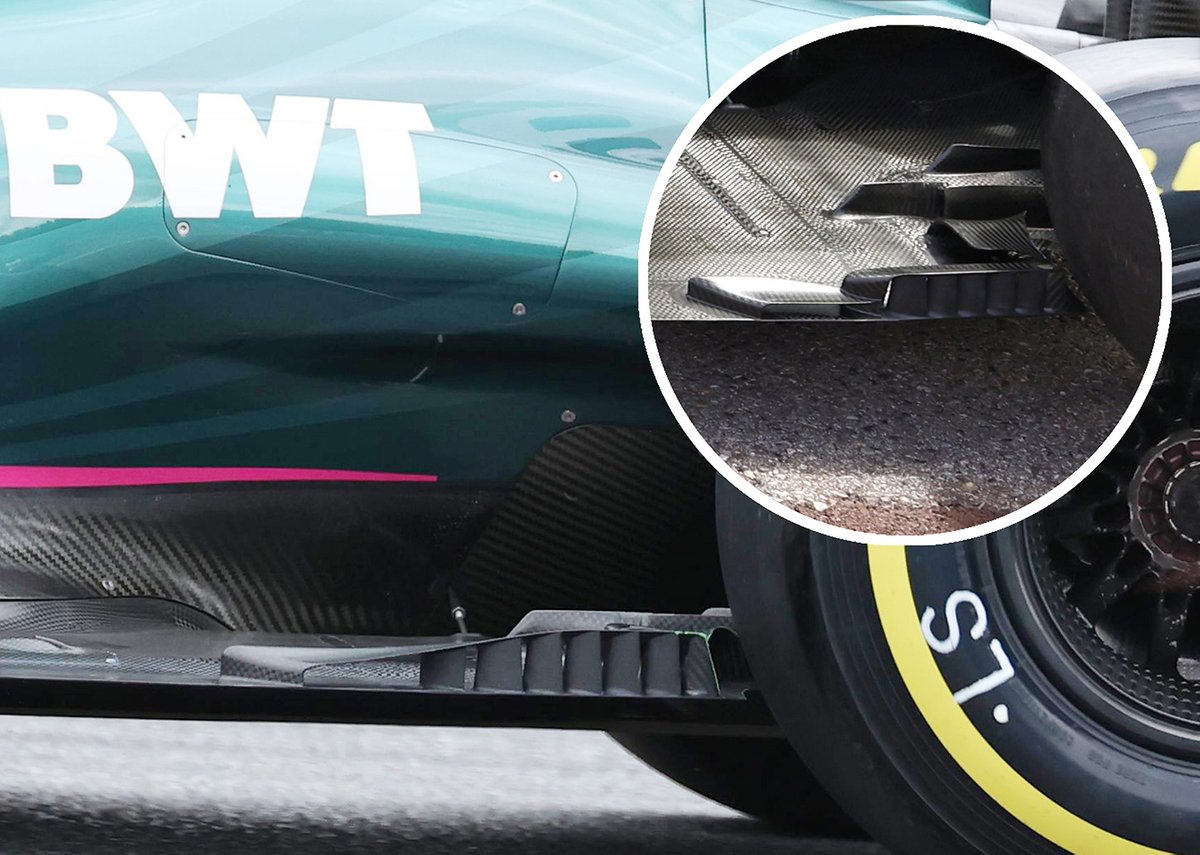 Aston Martin also paid close attention to the area just ahead of the rear tyre, with the large winglet cluster sat on the floor’s edge given a more sinuous transition, rather than the step-like approach taken before (inset). 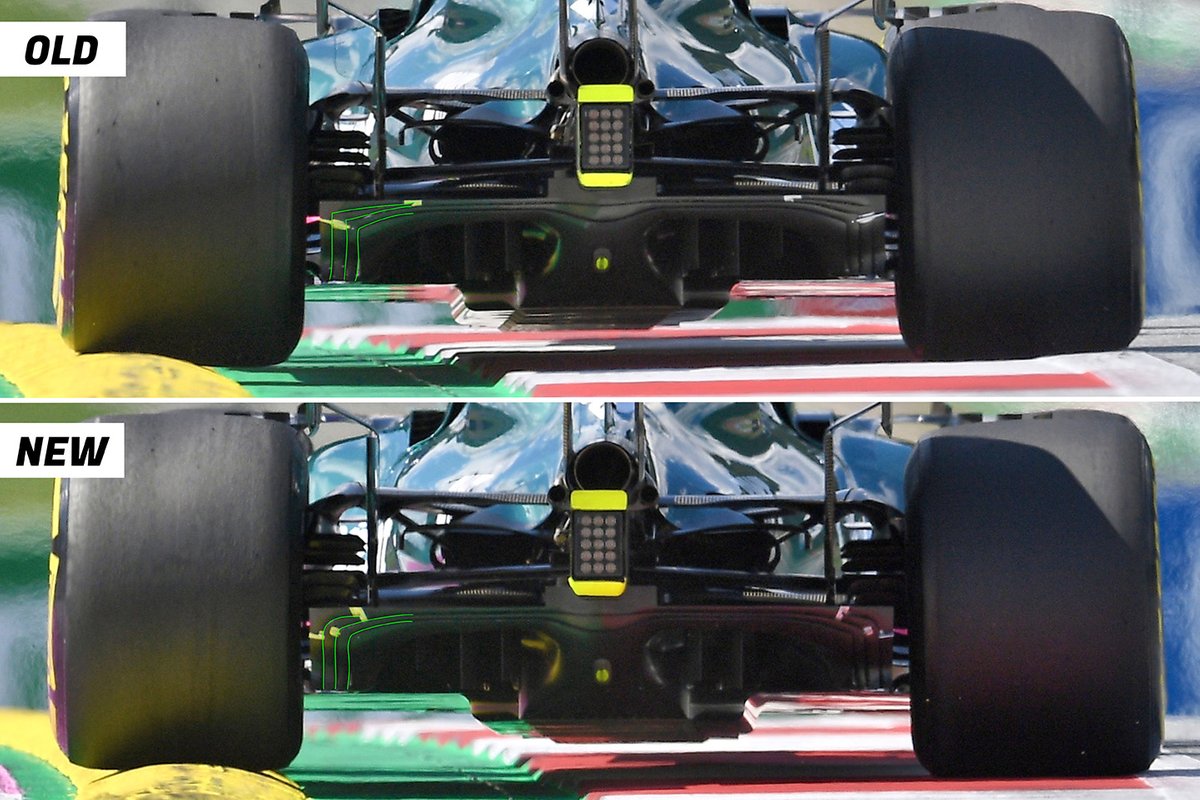 The team also made some delicate adjustments to the outer corner of the diffuser too, with the shape of the Gurney-like flaps that surround the main diffuser body rounded off (marked in green).

The uppermost slot has also been shortened and, as a consequence of the alterations, the metal stiffeners have also been relocated (highlighted in yellow). 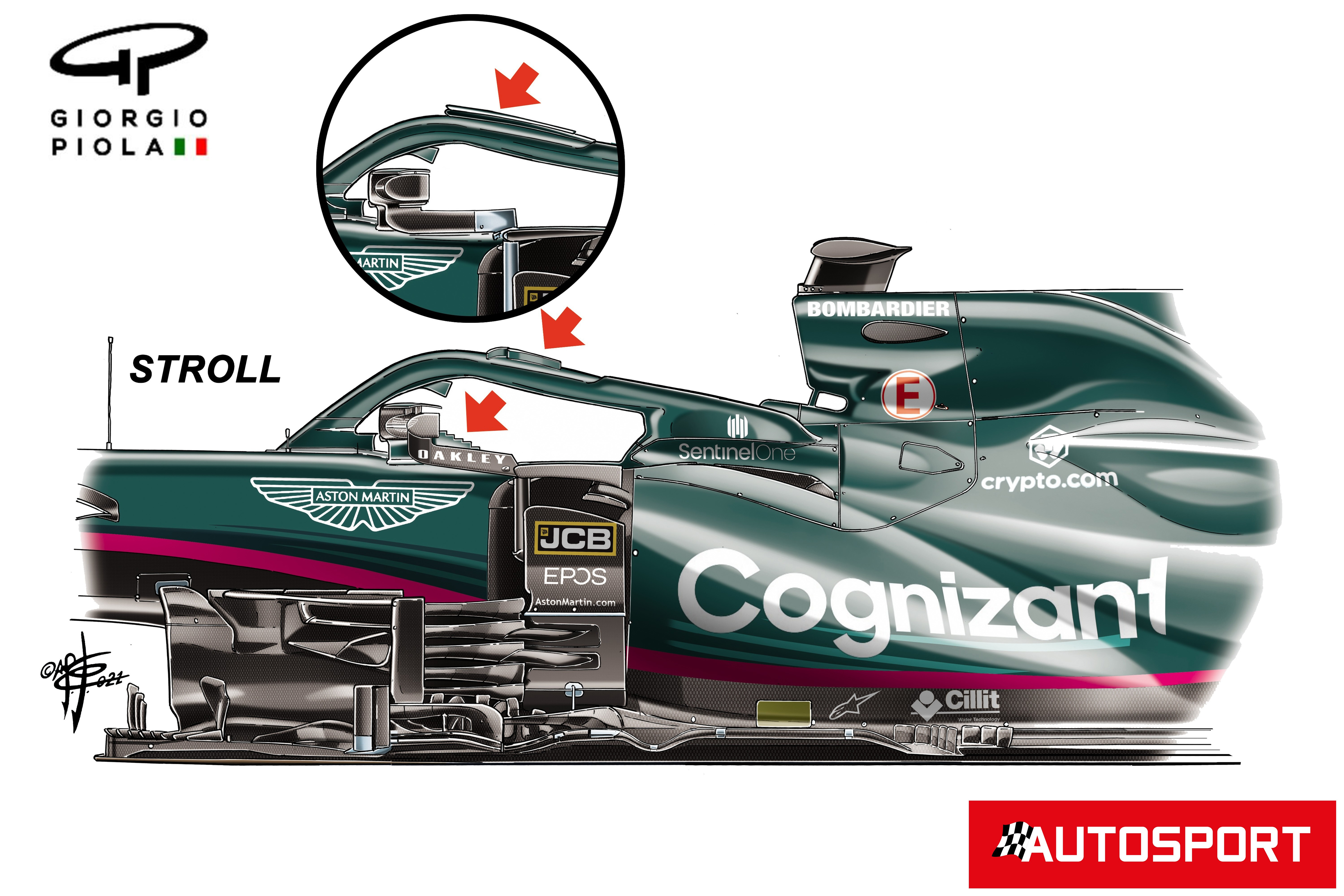 The updates that arrived at the Austrian Grand Prix came after a series of steps had been introduced in the early phase of the campaign.

The team had a decent upgrade package for the Portuguese Grand Prix and made some smaller changes at the Azerbaijan Grand Prix too.

The changes introduced for Baku dealt with the flow around the cockpit, with a serrated set of wing mirror stalks similar to Mercedes deployed, whilst the boomerang winglet atop the halo was discarded in favour of a pair of small fins on either side of the halo.