Max Verstappen won his 15th F1 race and his 50th podium finish at the 2021 Austrian French F1 GP today. He started from pole and won on the Red Bull Ring for the fourth time. It was his 5th win of the season. The Red Bull Racing team scored their 70th race win.

The start of the race was clean. Valtteri Bottas in the Mercedes almost got passed by the AlphaTauri of Pierre Gasly in the run to turn 3 but couldn’t make it stick. Esteban Ocon got sandwiched with the Alpine by the Haas of Mick Schumacher and the Alfa Romeo of Antonio Giovinazzi which ended his race, because his steering rod broke. The Alpine had to be recovered with a safety car period.

The safety car period ended at the end of lap 3. The restart was quite eventful Red Bull driver Sergio Perez had a good fight with Lando Norris for P2. Perez was going wide in turn 4 and had to drive through the gravel and dropped back to P10. Bottas also passed his Mercedes teammate Lewis Hamilton in turn 4, but was overtaken by Hamilton a few laps later.

Max Verstappen was pulling away and already was 3 seconds in front of Norris in lap 7. George Russell who scored his best ever starting position in a Williams on P8, had fallen back to P12.

AlphaTauri was the first driver who pitted as first to switch from  soft tyres to the hard tyres in lap 13. His teammate Pierre Gasly did the same one lap later. Sergio Perez had busy afternoon and had to fight for P8 with Ferrari drivers Charles Leclerc and Carlos Sainz now.

It took Hamilton 20 laps before he was able to pass Norris for P2. At the moment Norris got passed the news got out that Norris was given a 5 sec. penalty for pushing off Perez in lap 4.

Daniel Ricciardo was one of the front runners who was the first of the medium tyres starters. He pitted to switch to the hard tyres in lap 30. Norris did it 1 lap later together with Bottas and lost P3 to the Mercedes driver. Race leader Verstappen also pitted to switch from medium to hard at the end of  lap 32. 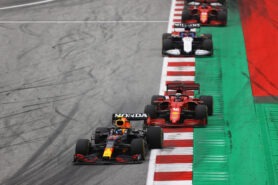 Because of the pit stops Perez overtook Leclerc again for P8. But in lap 41 Leclerc was back on the tail of the Mexican driver and did a move in turn 4. He did the same maneuver as Perez did in turn 4 on Norris, but now Perez pushed off Leclerc and received a 5 sec. penalty.

Hamilton seems to have damaged the rear right of his car in turn 10 and his pace was going down. He still was driving on P2 over 18 sec. behind the race leader Verstappen in the Red Bull.

In lap 47 Leclerc and Perez again had a clash and Perez pushed Leclerc off again, but now in turn

Sainz was the last driver who made his pitstop. He drove 47 laps on the hard tyre with the Ferrari.

In lap 51 Bottas was only 0.5s behind Hamilton for P2 and Hamilton had to let Bottas pass in turn 3. Norris was not far away and inside the DRS zone off Hamilton. Norris did a move in turn 4 that was covered by Hamilton. One turn later Norris passed Hamilton for P3. Hamilton pitted right away to get a new set of hard tyres and returned to P4.

At the end of lap 60 Verstappen went in to also get a new set of hard tyres to try and score the extra point for the fastest lap.

In the end George Russell lost P10 to Fernando Alonso and in the last lap Kimi Raikkonen collided with Sebastian Vettel.