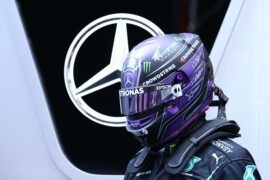 Lewis Hamilton scored his 100th F1 pole position of his career, during the 2021 Spanish Grand Prix qualifying session today. The Mercedes driver will start from P1 for the sixth time in Spain. It was the 129th pole for the Mercedes F1 team.

Q1
After 10 minutes delay due to repairs of the barrier in turn 9 after a crash in earlier race series, qualifying started off.
All cars got on their way and nobody crashed during Q1. Pierre Gasly drove a great lap with the Alpha Tauri being 3rd.

In the end only Lance Stroll made it into Q2. He pushed out rookie Yuki Tsunoda in the AlphaTauri. Lando Norris who also almost got pushed out put in a great lap and even got P1 in this Q1 being the only one in the 1:17 min.

Max Verstappen was the quickest by far after the first stint. He was the first to get below 1:17 min and even was 0.4s quicker than Valtteri Bottas on P2 in the Mercedes.

Ocon and Perez were able to improve their lap time enough to get into Q3. They both pushed out Lance Stroll (Aston Martin) and AlphaTauri driver Pierre Gasly.

Q3
After Q2 it’s interesting to see that both Red Bull, Mercedes, Ferrari, McLaren and Alpine drivers made it into Q3. The shoot out for pole was kicked off by Lando Norris. He drove a very good lap in the McLaren with a 1:18.010, but ended up. Perez had spun in turn 13 and caused a short yellow period of yellow flags. At the end of the first stint of Q3 Lewis Hamilton was on top with a time of 1:16.741. Verstappen was only 0.036s slower on P2 and Bottas on P3 on 0.132s behind Hamilton.

The second stint was kicked off by Hamilton who improved in sector 1, but didn’t improve his lap time. He still was quick enough to score an never seen 100 pole positions! Verstappen was 2nd and Bottas 3rd.

The pole time of last years Portuguese GP was a 1:18.348 min driven by Valtteri Bottas in the Mercedes.