May 6 – The fourth round of the exciting 2021 Formula 1 World Championship will be the 2021 Spanish Grand Prix at the Circuit de Barcelona-Catalunya, at Montmeló. Lewis Hamilton and Mercedes enter the weekend leading the World Drivers’ Championship and the World Constructors’ Championship, respectively.

After great battles for the podium places between Hamilton, his teammate Valtteri Bottas, and Red Bull’s Max Verstappen in Portugal, Hamilton took a convincing victory. Now, Red Bull and Verstappen need to quickly strike back, and the Spanish circuit could be the right one to do so, though the weather might have some surprises in store for the top teams.

In the first three races, only Hamilton and Verstappen have finished first or second, with Hamilton winning twice, and Verstappen winning the 2021 Emilia Romagna Grand Prix. Right now, Hamilton leads the WDC with 69 points, eight more than the Dutch racer, and both drivers have had impressive wheel-to-wheel battles in each of the three motor races so far.

Behind them, McLaren’s Lando Norris has been the most consistent driver, with three Top 5 finishes (and four in a row, including the 2020 Abu Dhabi GP). Norris sits third in the WDC with 37 World Championship points.

Norris’ teammate, Daniel Ricciardo, scored points in all races so far, but he has not looked comfortable with McLaren’s MCL35M. The Australian will be needed for McLaren in their bid to again finish third in the WCC behind Mercedes and Red Bull, as the battle behind the top outfits seems very close, and each McLaren, Ferrari, and Alpine could have a close fight for P3 in the World Constructors’ Championship.

At the moment, McLaren (53 points) sits third in the WCC, ahead of Ferrari (42 points with Charles Leclerc and Carlos Sainz). Alpine has not been great so far, but Esteban Ocon and Fernando Alonso finishing seventh and eighth at Portimao could be a huge boost for the team in the early stages of the season.

AlphaTauri has not been highly consistent so far, and Pierre Gasly and Yuki Tsunoda have scored points three times between both, and the team is sixth in the WCC.

The struggling Aston Martin is seven in the WCC with only five points, and the team’s claims that they were disadvantaged by the new aerodynamics regulations for 2021 continue against the FIA. Lance Stroll scored points in the first two races, but both the Canadian and Sebastian Vettel struggled at Portugal (14th and 13th, respectively), even though the four-time World Champion entered the Q3 for the first time since the 2020 British Grand Prix (15 races).

Alfa Romeo (Kimi Raikkonen and Antonio Giovinazzi), Williams (George Russell and Nicholas Latifi) and Haas (Mick Schumacher and Nikita Mazepin) are yet to score. For FP1, Alfa Romeo will have Polish Grand Prix-winner Robert Kubica on Raikkonen’s car, and Kubica will also be a part of two-day test of the 18-inch Pirelli tyre after the race.

This will be the fourth round of the 2021 Formula 1 World Championship and the 61st Spanish Grand Prix in history.

The first Spanish Grand Prix was held in 1913. The race was part of the pre-war World Manufacturers’ Championship and the European Championship in 1927 and 1935, respectively.

The race on Sunday will be the 50th World Championship Spanish Grand Prix. The first-ever World Championship of Drivers’ race at Spain was at Pedralbes in 1951 when Juan Manuel Fangio’s 18-inch tyres proved to be too much against Ferrari’s 16-inch tyres and the Argentine emerged with the win and his first World title.

The race was sporadically in the championship during the early years. It took place in 1954 before disappearing for over a decade. It made its return in 1968 with Graham Hill winning for an emotional Lotus team at Jarama, as Jim Clark had died weeks before and that race was the first after the tragic loss of the Scottish legend.

Jarama and Montjuic hosted nine and four World Championship Grands Prix between 1967 and 1981, with Jarama also hosting non-championship races in 1967 and 1980. At Montjuic, in 1975, a dark day occurred after a rear-wing failure in Rolf Stommelen’s Hill car caused an accident which tragically took the lives of four spectators.

The race again disappeared from the calendar for several years before returning in 1986, at Jerez de la Frontera.

Ayrton Senna and Nigel Mansell provided a great fight for the win in 1986, with the Brazilian beating Mansell by just 14 thousands of a second. In 1990, Martin Donnelly suffered a big crash in his Lotus which ended his career.

Barcelona arrived in the Formula 1 championship in 1991 and the Circuit de Barcelona-Catalunya has hosted the Spanish Grand Prix ever since and it will be hosting its 31st straight Grand Prix.

The track has provided some awesome moments, like Mansell and Senna again battling with just inches between their cars in 1991 or Michael Schumacher’s stunning win in the wet 1996 GP, which was the first of his 72 wins for Ferrari. Also, Williams took its last win to date in Barcelona, with Pastor Maldonado shocking the paddock in 2012. Fernando Alonso took his last GP win to date at Barcelona in 2013, whilst Max Verstappen’s first-ever win was in Spain in 2016, after Hamilton and Nico Rosberg’s Mercedes collided in the start.

Schumacher is the all-time leader in terms of wins in Spain, with six, while Hamilton is second with five. Regarding teams, Ferrari has been the most successful in Spain, recording 12 wins. McLaren and Williams have eight wins each, though one of Williams’ triumph was in the 1980 non-championship race.

Mercedes, on its side, will be looking to win their seventh race in Spain. Red Bull won three times at Spain, with Mark Webber in 2010, Vettel in 2011 and Verstappen’s maiden victory in 2016.

A challenging track, the Circuit de Barcelona-Catalunya is a 4.675 km park with 16 corners. It probably is one of the places drivers and teams know to perfection since winter testing usually takes place at the venue. 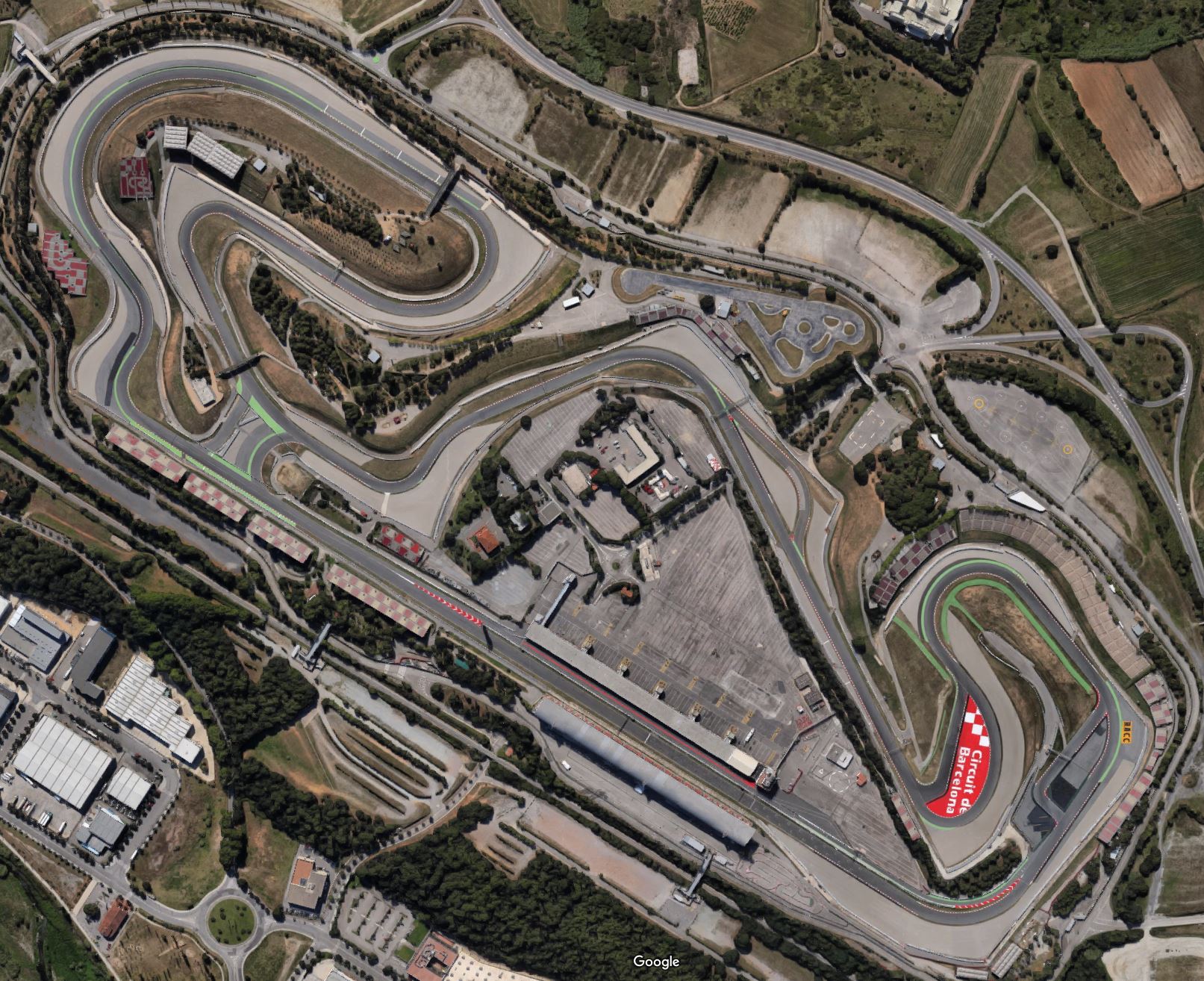 The track is aerodynamically demanding while having a long straight, which makes the setup aspect a very difficult one. Its layout has been slightly altered over the years, with a slower Turn 10 (La Caixa) added instead of a sweeping left-hander in 2004. Also, the final sector was originally fast, with the last two corners being two sweeping right-handers. Since 2007, a chicane in the final sector was added.

For the 2021 event, the track has suffered a new change in the Turn 10 (La Caixa) as the corner was given a new shape that resembles a bit of the original track layout, and the change was made to enhance safety in that sector.

The dry tyres for the 2021 Spanish Grand Prix will be the C1 as P Zero White hard, C2 as P Zero Yellow Medium, and C3 as P Zero Red soft, which is Pirelli’s hardest choice for the year and the same as the previous race at Algarve.

Pirelli explained its choice with a press release: “Although the weather conditions are likely to be considerably cooler in Spain than last year, the high-energy demands of the track remain: especially the very long Turn 3 right-hander, which puts considerable forces through the front-left tyre in particular. Not only that, but Turn 9 is also challenging for the tyres. As a result, the hardest compounds are still the most appropriate choice.For the first time since 2014, there has been no pre-season testing at Barcelona, so the teams come to this circuit with their new cars for the very first time, not having had a chance to gather data on how the cars perform there in their latest specification.” 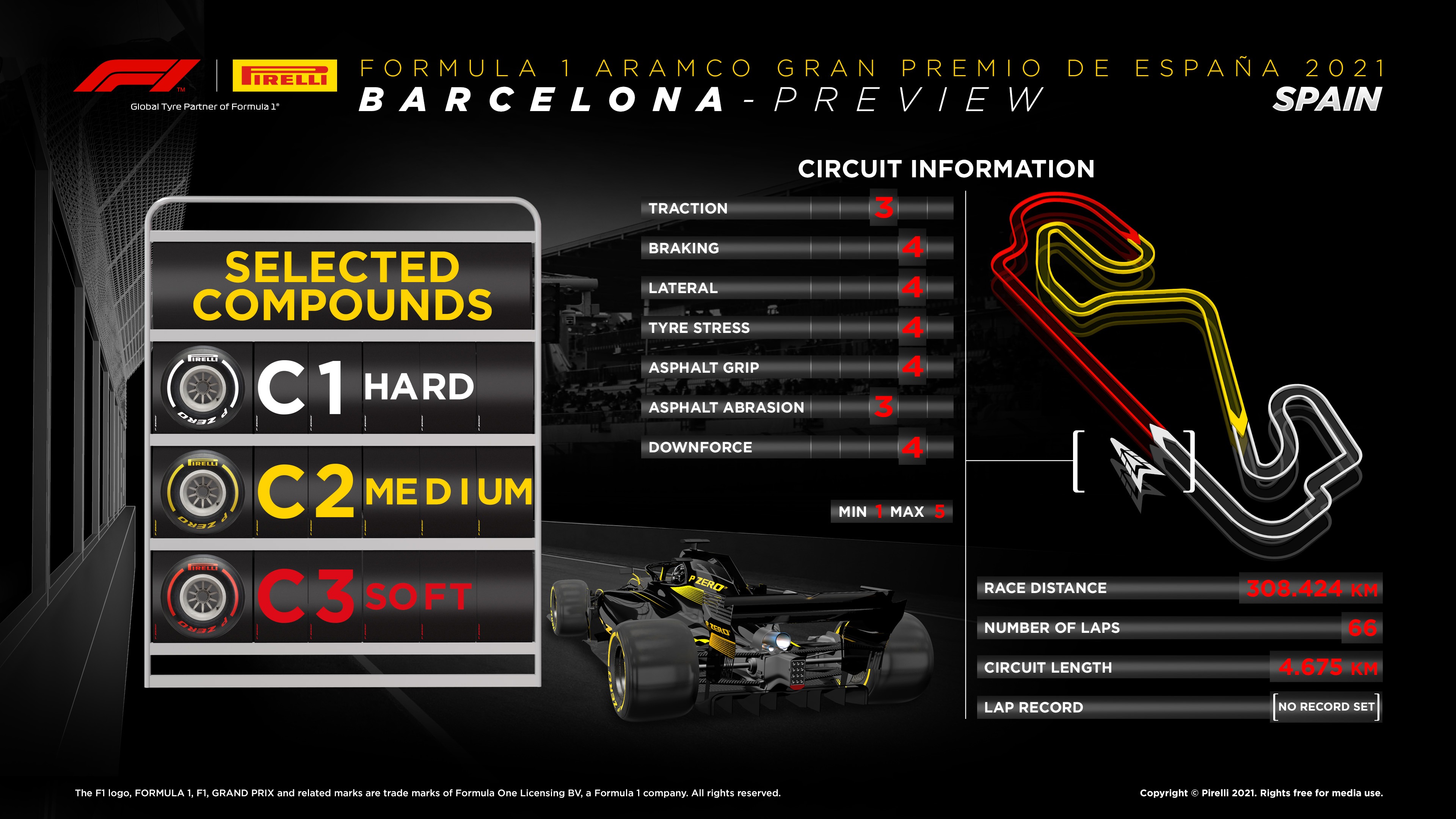 Mario Isola, Pirelli’s head of motorsport, further explained Pirelli’s tyre choice for the 2021 Spanish Grand Prix:
“The race strategy in Barcelona was influenced primarily by the very high track temperatures last season. This year, with the race moving back to a spring date, temperatures will be cooler but should still be a key factor behind the strategy. The altered corner profile of Turn 10 provides another new challenge that could influence the way the drivers approach the lap. We’ve seen in the past that strategy has been one of the key differentiating factors at Barcelona and we would expect this to become the case once more this weekend.”

Pirelli will give each driver eight sets of soft tyres, three sets of medium tyres, and two sets of hard tyres.

Who will be on the 2021 Spanish Grand Prix Podium?

The fourth round between Mercedes and Red Bull for the championship should be thrilling and it might be a great chance for Red Bull to snap Mercedes and Hamilton’s run of four consecutive victories at Barcelona. 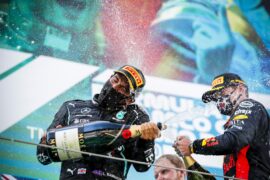 The RB16B started the year with a little better stability than the Mercedes W12, and if that’s certain at Spain, the Bulls could have the perfect chance to strike back at the German team. Max Verstappen achieved his first F1 win back in 2016 at Spain, and he will be looking to tie Hamilton’s tally of two wins in the 2021 campaign and maybe grab the lead of the World Championship for the first time in the Dutchman’s career.

Valtteri Bottas and Sergio Pérez had a good weekend at Portimao, finishing the race behind their teammates, but not having a disappointing pace. At Spain, both will likely be behind the pair who is fighting for the championship, but a solid outing could be in the cards for both the Finn and the Mexican.

McLaren, Ferrari, and probably Alpine will be behind Mercedes and Red Bull and trying to take advantage of any mistake made by the top four runners.

Earlier in the week, there was rain expected for the race at Spain on Sunday. Chances of rain have decreased in the last few hours, but it would certainly add a great condiment for the race.