In 1974, Argentina’s Reutemann scored his first grand prix win, at Kyalami in South Africa. It was significant not only as the first Formula 1 World Championship triumph for a Brabham since 1970, but also the first victory for a Gordon Murray-designed F1 car – by happy coincidence, in Murray’s original home country.

The fact that Reutemann should find success early in his third season at this level was hardly a shock to the Formula 1 establishment. Most of his rivals had been expecting it ever since Carlos was signed by Brabham’s new owner Bernie Ecclestone in 1972 – and landed pole position on his grand prix debut.

Although the remainder of Reutemann’s rookie season was squandered by the mediocre Brabham BT37, 1973 started showing promise once Murray’s BT42 hit the tracks. In an era where only the top six finishers scored points, Reutemann was rewarded six times in the last nine races of the season, including two podium finishes. Then when Murray penned the striking BT44 for 1974, Brabham started looking once more like a team worthy of its founder, Sir Jack Brabham, and Reutemann would score three wins that year.

The handsome BT44B update for 1975 faced Lauda’s fast and reliable Ferrari 312T, and now Reutemann had the opposite problem to the year before. Murray had ironed out the bugs of the original so that the car was near-bullet proof in terms of reliability, but it was now missing a vital edge in speed, so that Reutemann burned through his Goodyears trying to keep up with the red cars on race day.

He would finish third in the championship with one win – a lucky triumph at the Nurburgring – and five other podiums. But for arguably the first time in his career, he’d come up against a tough team-mate, Carlos Pace, and been found wanting in terms of qualifying speed, a trend that continued into ’76.

Given how sensational Reutemann would later prove he could be, maybe Pace – who would die in a plane crash in 1977 – was one of F1  greatest unfulfilled talents. Or, as some speculated, Reutemann let his head drop. Reutemann was a sensitive man, emphatically not bull-headed, and on detecting a closer bond between Brabham team management and Pace, it’s not inconceivable that troubled him to an unusual degree.

Not that there were any winners at Brabham in 1976, since Ecclestone had replaced Cosworth V8s with Alfa Romeo flat-12s. The gorgeous Martini-liveried machines were neither swift nor reliable, and Reutemann got the short end of the stick, failing to finish nine of the 12 races he started for the team that year.

Thus Enzo Ferrari was pushing at an open door when he approached the Argentinian about replacing Clay Regazzoni for 1977. The move occurred early, when Lauda suffered life-threatening injuries at the Nurburgring in 1976. But just as Ferrari confirmed Reutemann for the Italian GP at Monza, the scorched defending champion announced his scarcely believable return, obliging the Scuderia to run three cars. Lauda outpaced his soon-to-be-full-time team-mate in both qualifying and race at Monza, rendering the extra entry superfluous, which meant Reutemann sat out the remaining three races having quit Brabham.

Into the 1977 season, Lauda and Reutemann were roughly even in terms of qualifying, but the stone cold Austrian who had little time for his team-mate would take three wins and the world championship, while Reutemann took a solitary victory and fourth in the points race after a season of looking brilliant at times, mediocre at others.

Yet when Lauda quit the squad before season’s end, Reutemann was thrust into the team leadership role, with rookie Gilles Villeneuve as team-mate. Reutemann responded magnificently. While Lotus scored eight wins in 1978 and lead driver Mario Andretti earned the world championship, the closest thing to a consistent threat to the gorgeous ground-effect Lotus 79s was the non-ground-effect but Michelin-shod Ferrari 312T3 of Reutemann, which took four victories and third in the championship.

His stock was therefore high when he switched to Lotus for 1979, but the move was ill-timed: the new Lotus 80 did not work well at most circuits. Andretti would land third place on the beautiful machine’s debut, but he would use it just twice more, while Reutemann refused to race it altogether. He instead elected to revert to the Lotus 79 which by now wasn’t quite fast enough to seriously threaten for victory.

The car that came on strong in the second half of that season had been the Williams FW07, and Reutemann jumped at the chance to switch over to Frank Williams’ team for 1980 and race the new B model – even if it meant signing a contract to run as No. 2 to Williams incumbent Alan Jones. That deal would soon become immaterial as the Australian won five races and the world championship to Reutemann’s single victory at Monaco and third in the points table, Brabham’s Nelson Piquet separating them in the standings.

Reutemann seemed set to turn the tables in ’81 with the FW07C, picking up his qualifying pace (10-5 versus Jones) but he would cause friction within the Williams team who, despite Jones’ title, still hadn’t lifted the restriction on Reutemann to serve as No. 2. The Argentine was pressured by Jones into a mistake while leading the season-opener at Long Beach, but in Brazil, Reutemann ignored team orders, failed to move over for Jones, and went on to victory. Jones and the team were not impressed.

Reutemann won again at Zolder, and that was an emotionally-charged triumph, as during practice an Osella mechanic had fallen into the path of the #2 Williams in pitlane and had died from his injuries. Carlos’s deep distress didn’t show in his perfect drive, but was very apparent on the podium. He would later fly to Italy to meet with the young mechanic’s parents. 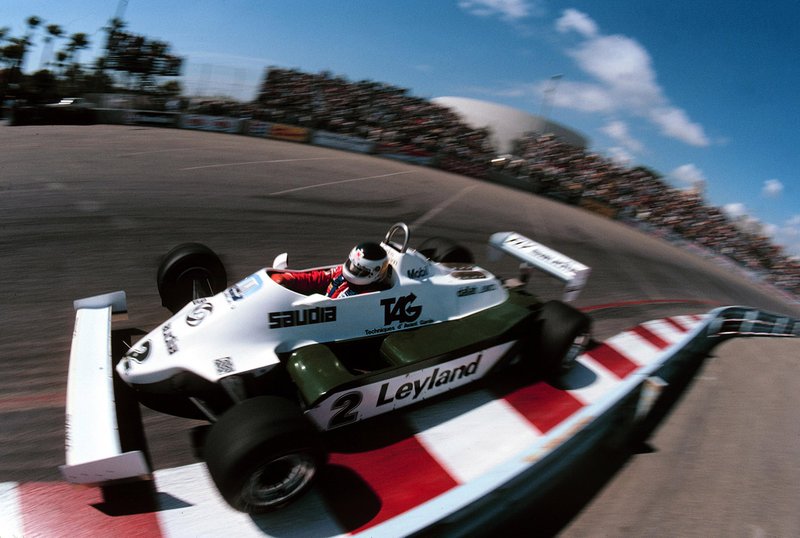 After Round nine of 15, Reutemann held a 17-point lead in the championship. Yet only twice more in the remaining six rounds did he finish in the top six, and in the final three races of the year drove as if he didn’t really want the title, offering little resistance to his only real protagonists, Piquet (who took the crown) and Jones. Reutemann decided a few days after the season finale to quit F1. Later he reversed the decision, and competed in the first two GPs of 1982 for Williams and scored a podium, before again quitting, this time permanently.

As he moved into political life as governor of Santa Fe, the motorsport world was left pondering the enigma of Reutemann. Was he too sensitive? Had he needed more cosseting to produce his best on a more consistent basis? Was he consciously or subconsciously averse to the attention that a championship would have brought? Did he simply overthink things? How could a man mentally strong enough to overcome the tragedy in pitlane at Zolder in ’81 in order to take pole and victory not show the same steeliness when dealing with team-mates such as Lauda or Jones?

No one – perhaps not even the man himself – had all the answers. But most would agree that at his best, Reutemann was near-untouchable. 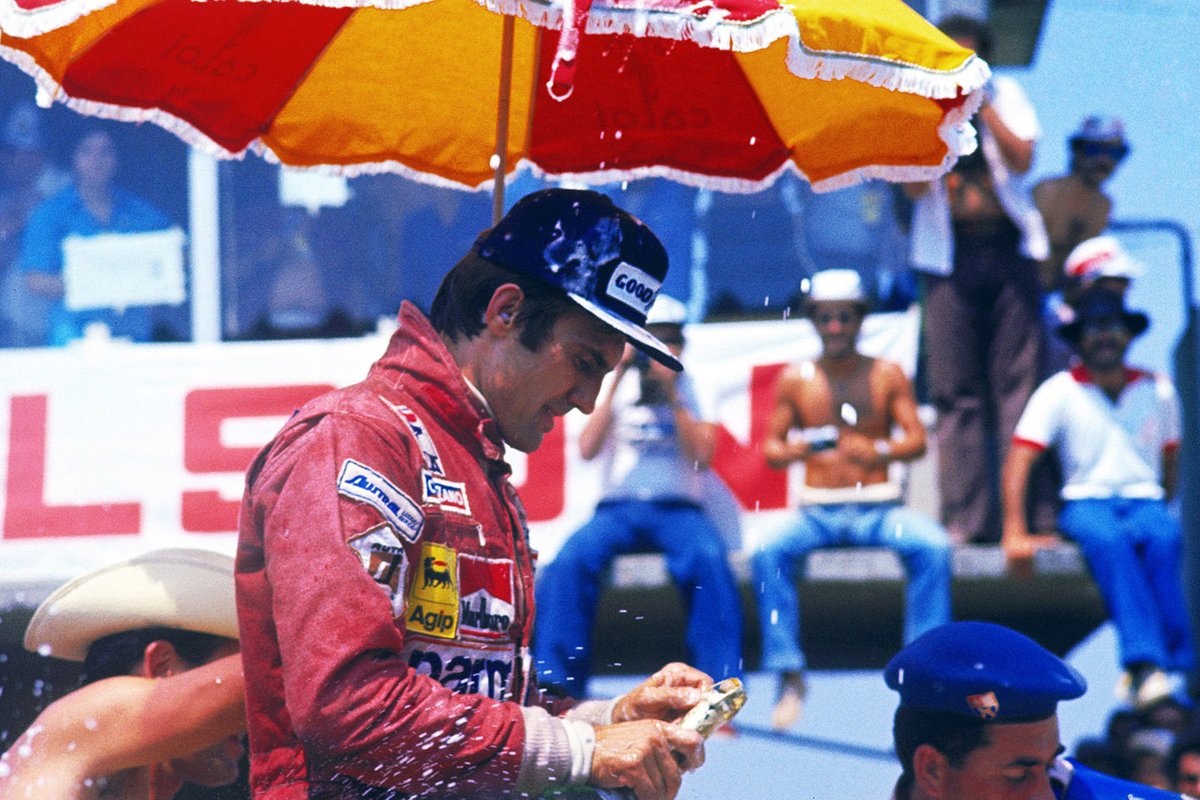 Carlos Reutemann, Ferrari celebrates his victory on the podium attempting to open his bottle of champagne